One of the most significant fundamental relations in lean manufacturing is the relation between the inventory, the throughput, and the lead time. The inventory and the throughput are usually easy to measure. The lead time, however, is more difficult. You would need to take the time when a part enters the system and then take the time again when a part leaves the system. Luckily, the lead time can easily and accurately be calculated using Little’s Law, one of the most fundamental laws in lean manufacturing (and also many other places).

Little’s Law was first published around 1954. It is named after John Little (an MIT professor and not one of Robin Hood’s merry men 🙂 ). He did not invent the law, but he was the first to mathematically prove the universal validity of it in 1961.

First, let’s first explain the variables. Throughout this post, I will use a supermarket checkout as an example, assuming that all of you have at one time or another waited in line at the checkout. Hence, our example system is the checkout system, defined as the system including all customers waiting in line or being processed (but not still shopping for goods).

Inventory is simply the number of parts in the observed system. You could also call it WIP (Work in Progress). For our supermarket checkout, the inventory would be the number of people waiting in line, including the customer currently being served (but not the cashier – that would be the process).

The throughput is the average number of parts completed in a given time. Taking again the example of a supermarket, it could be measured in customers per hour.

The throughput is also rather easy to measure. You check how many parts you have produced during a period of time. Dividing the number of parts by the total time  gives you the throughput. 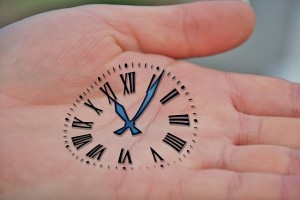 The lead time is the time a part takes to pass completely through the system (i.e., it is the time between entering and leaving the process). In the example of supermarket checkouts, it is the time from when you start to wait in line until you pick up your goods and leave.

The lead time is difficult to measure directly. In a supermarket, you could have everyone measure their own waiting time. For physical parts, however, someone would have to measure it. In reality, this is quite impractical.

The lead time, however, is an important value in manufacturing. A longer lead time means that you will need more time to implement changes.

Little’s Law is actually quite simple. There are three variables, often labeled as follows:

Little’s Law is then the very simple relation as shown below.

However, for sake of clarity I prefer to write it out in full. Hence:

Hence, to determine the lead time you calculate:

And finally, to determine the throughput you calculate:

Often in academia, you can find very boastful research results – except if you read the assumptions closely, you find out that it applies only to a very special and highly unrealistic situation. Quite frequently, these limitations make the research results unusable in practice.

Little’s Law, however, has only two major assumptions. First, you need to have a stable system without major changes. In other words, the three variables involved (inventory, throughput, and lead time) do not change significantly while being observed. Assume again you have a supermarket with one cashier. Using Little’s Law, you calculate the estimated waiting time based on the speed of the cashier and the number of people in the queue. However, if a second checkout line is opened, the speed of the system doubles. Hence, your calculation is no longer valid, since the system speed has doubled. Similarly, if the queue gets longer because more people arrive than leave, then Little’s Law no longer gives the average waiting time. Therefore the arrival and the departure rates have to be similar.

Second, the units used for the inventory, throughput, and lead time have to be consistent. Measuring the throughput in batches per hour, the inventory in individual items, and the lead time in days will mess your calculations up, unless you convert the values into consistent units.

In practice, however, both assumptions are very reasonable assumptions. First of all, most manufacturing systems do not change drastically within a short time, even if you merely update the values for the formula and get the new numbers. Regarding the units, basic knowledge of math and common sense can easily avoid this problem. Therefore, Little’s Law has an almost universal validity and is highly applicable in practice!

What Is Not Relevant

The beauty of Little’s Law are all the factors that do not matter. This universality makes Little’s Law extremely practical in everyday shop floor operations.

Hence a customer waits an average 2.5 minutes in line. Let’s expand this for the entire supermarket. How long does the average customer spend in the supermarket? Let’s assume:

Let’s do a manufacturing example. What is the average duration a part spends in the finished goods warehouse (i.e., what is our reach on finished goods)?

Hence the average piece spends two-thirds of a month in the warehouse. Let’s look at the lead time of the entire material flow:

Hence a part takes roughly 1 month to pass through the entire system. Now let’s assume we have a kanban system. How long takes a kanban to complete the loop? Assume one kanban represents 100 pieces, and there are in average 50 kanbans waiting for production.

Hence it takes 1.33 months before a kanban completes an entire loop.

You can also use Little’s Law for continuous processing as, for example, chemicals. Let’s calculate how long water stays in  America’s largest lake, Lake Superior, before it leaves the lake.

Hence water stays in Lake Superior for almost 160 years before it flows out. More than half of the water in the lake was already there when Abraham Lincoln was President 🙂 .

Why It Is Relevant

Little’s Law is almost always valid and very easy to calculate. It also shows the relation of the two factors influencing the lead time: inventory and throughput. The graph below shows this relation in relative terms. 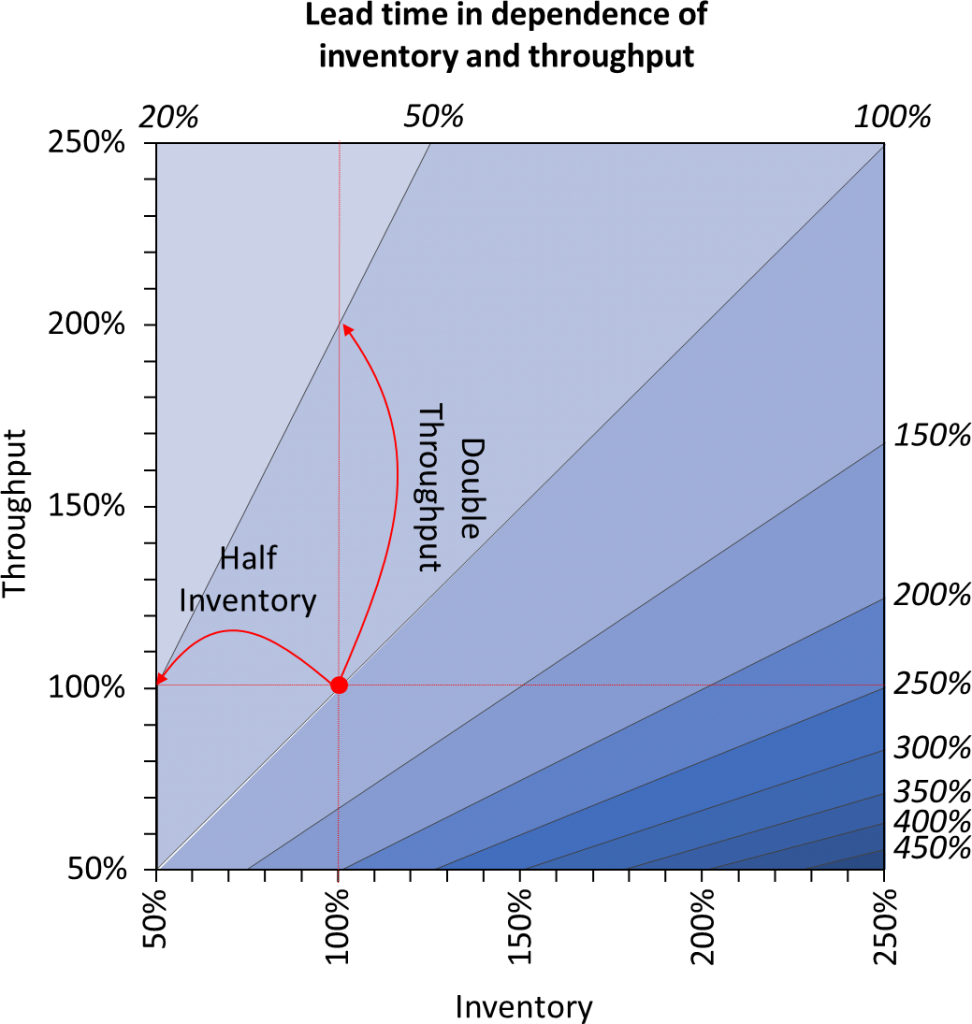 Hence, if you want to reduce your lead time by half, you would have to either double your throughput or halve your inventory. Both would achieve the same results. However, doubling the number of parts produced in a given time is probably rather difficult and expensive in practice. Halving the inventory is usually much easier. Besides, if you halve your inventory, you may even get money back by temporarily selling more than you purchase or produce.

Therefore, Little’s Law is another mathematical justification for the push in lean production to reduce inventory, and the advantage of pull production and its fixed limit on WIP. But please, keep enough inventory for your system to work smoothly, or it will be more expensive than before.

I hope this article was interesting for you and helps you with your daily work of improving your system. Now, go out, calculate your lead time, and organize your industry!

PS: This is my 100th post on AllAboutLean.com. Thanks for reading, following, and commenting 🙂

21 thoughts on “A Eulogy for Little’s Law”