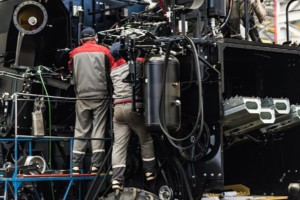 This post finally concludes my list of questions to ask for design for assembly (DFA). I myself was surprised that there is enough material for three posts, and this does not even include the introductions and the design for manufacturing aspects (DFM). Anyway, let’s have a look at how you can make assembly easier.

Design for Assembly (continued even more…)

Can You Make Them Easier to Assemble? 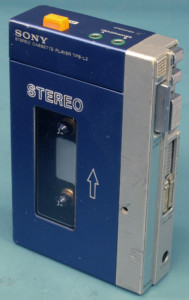 Another question to ask is if you can make the parts easier to assemble. This is again one of the bigger questions that often have lots of potential. There are also multiple aspects on this question. Design the parts so that they can be assembled from only one side. This one-sided-assembly avoids reorienting the part during the assembly. Often, this involves a larger “base” part onto which additional components are added. It is recommended to have this assembly side top down, rather than sideways or upside-down assembly (yikes!). Gravity is your friend here. 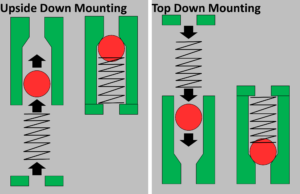 Many modern electronics are built using this concept. One famous part that was designed especially with this assembly from one side only was the original Sony Walkman in 1979. One example that I witnessed did this (initially) spectacularly wrong. It was the assembly of a simple spring-loaded valve, where a small steel ball was pushed into the valve by a spring until the pressure became too great and the valve opened. The original vision of the automation engineers was to mount this upside down. The ball was supposed to be balanced on the tip of a tool, followed by a spring before closing the valve. I am sure you can see a lot of things that can go wrong here. After some feedback, they decided to simply drop the ball and the spring top down into the valve. 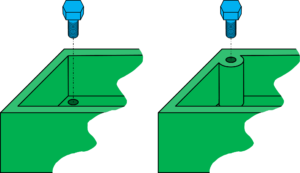 A good example for this is car seats. They are bulky, and if you design them not so well, the screws are hard to access underneath the seat and out of view. Try to put the screws in a location where they are easier to reach and see, even though it may still be a bit cumbersome. 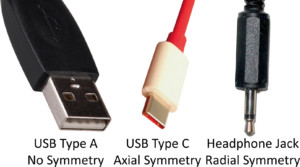 Another major factor that simplifies assembly is to have symmetric parts, especially when one part needs to be inserted into another one. The more symmetric a part is, the less time is needed to find the correct orientation. An example you are all familiar with is the USB Type A connector. It fits in only one way. In my case I often need three tries to get it in. An improvement is the USB Type C connector, which has axial symmetry and can be inserted in two different orientations. Even better would be the common headphone jack, which as radial symmetry and can be inserted in any orientation. Below is another abstract example. 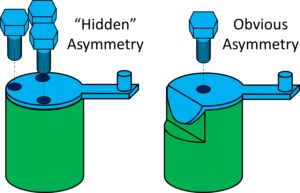 Please note, however, that there are cases where the part has to be in exactly the correct orientation later on. In this case it may be best to have as little symmetry as possible so that the part can be assembled only in one correct orientation. This asymmetry should also be not a “hidden feature,” but completely obvious during assembly. 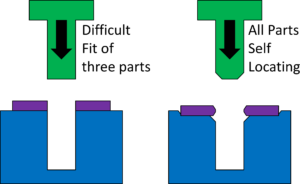 Another factor to check for is if the parts are self-locating and self-aligning. When putting the parts together, do they fit together easily or does the worker need to pay careful attention to make them fit? Often, adding a chamfer makes parts easier to join, or having additional features that make positioning easier.

If you can have parts that can be assembled with one hand only it will be easier than with two hands. If you need three hands or more, it becomes even more complex, as by the nature of hands you need more than one person to do the assembly. In general, one-person assembly is better than two, and one hand is better than two. It may not always be possible, but it may be worth a look.

Finally, depending on the quantity you produce, you may consider making assembly easier for machines and robots. For example, robots have more difficulty inserting a screwdriver into a screw. A slotted screw has only two positions how to enter the screwdriver. Cross-slotted drives and Robertson screws have four positions with 90 degrees in between. Hex screws and Torx screws have six possible positions. There are screws with even more positions, like the triple square (XZN), which has twelve possible positions. The more positions you have, the easier it is for a robot screwdriver to handle the screw.

There may be other ways to design parts for easier automated assembly, giving the machine additional clues to recognize and orient the part correctly. Of course you need those only if you actually plan to use automated assembly for these parts.

Can You Avoid Adjustments?

Depending on your product, there may be small adjustments as part of the assembly process. Can you eliminate these adjustments? Can you design the part in a way that an adjustment is no longer needed? This question may not be relevant for all products, and may not yield results for those products that do have adjustments. However, in manufacturing history, it was one of the major productivity gains. Before there were interchangeable parts, assembly was mostly filing parts down to fit the other parts. Assembling a car in 1900 required more than half of the time for filing things down.

While you probably do have mostly interchangeable parts, are there some that are not? Are there some mix-and-match operations or steps to make things fit? These still exist in may products, and can be found even in automotive.

Can It Be Assembled Incorrectly?

While this post concludes the list of questions on design for manufacturing and assembly, there is still much more out there. These are often summarized as Design for X, which will be the topic of my next post. Now, go out, make your parts easier to assemble, and organize your industry!