All too often, good ideas for a lean implementation fail because workers won’t use the new ideas. They simply stick to their old habits. And, no matter how good the ideas are, if they are not used, then the improvement project is a failure. In this post I want to talk about this common problem in industry. The solution is – in theory – easy: Get your people motivated! Doing this in reality, however, is an extremely challenging task with an often-unknown outcome. 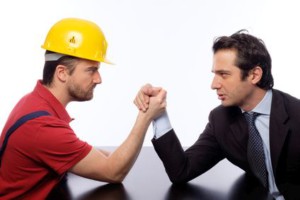 You’re working on a lean project. You analyzed the data thoroughly. You found a creative and usable solution. You got all the necessary items for implementation.  And you changed the procedures. Yet your implementation fails because the workers simply don’t do what you want them to do!

In theory, the solution is easy. You get your people so motivated that they do whatever you want them to do. In reality, achieving this is difficult and time consuming. This problem has existed since people started working together. Henry Ford is quoted, “Why is it every time I ask for a pair of hands, they come with a brain attached?” What most managers want is for the worker to behave like a machine made of flesh and blood. Yet your people are human too!

Below I will present a few ideas and suggestions that can help with these issues. But be warned, in all likelihood it is not only the worker that needs to change, but quite likely also you!

One easy way out is to set up a system that allows only one type of action, or at least makes one type of action much easier than anything else. This is very related to Poka Yoke, to make it idiot proof (although nowadays “mistake proofing” is the preferred term).

Other examples would be many types of plugs that fit only the matching socket. It is unlikely that a user puts a plug in the wrong socket, because either it does not fit at all or it is not intuitive.

If you can install such a system as your lean improvement, do it. It makes implementation much easier. Even a mechanical device that does not prevent something but only makes a correct action more likely is worthwhile. For example, I have used metal kanban cards to prevent them from being thrown out by accident.

Unfortunately, this approach does not always work. In the 1980s, GM CEO Roger Smith tried to robotize all GM factories so that they could set a standard simply with the flick of a switch. He invested $45 billion in robotics ($130 billion in today’s money, or twice the annual federal US budget for schools). As it turned out, robots weren’t ready yet, problems multiplied, and productivity halved. He also still needed people, and they were quite upset about his plans too. This is still considered one of the major business disasters in history.

The Big Fallacy: The Boss Is in Charge

Most modern work contracts include that the firm (represented by the supervisor or manager) has the right to instruct the employee on their work. In short: The worker has to do what the manager says. This could lead you to believe that to implement any change in the work, the manager simply has to tell the worker about it. I can already hear the more experienced managers and workers chuckling about this. Nothing could be more wrong.

While officially this is true, in practice there is A LOT of leeway. Employees are very good at avoiding instructions. Often, this is actually necessary to avoid bad instructions and to keep the company running. One of the easiest ways to strike is work-to-rule. Employees follow precisely all safety and other regulations, and productivity and quality drops significantly. Employees should have leeway, and they do take it. In ancient times, slaves had pretty much no rights, not even to their own body, and still found ways to avoid management instructions. Nowadays – luckily – employees can at worst get fired and sued, but firms reserve such actions only for the gravest offenses.

This brings me to the next part: the carrot and the stick. Since the carrot is more important, let’s first get the stick out of the way. The many different carrots will be in my next post. 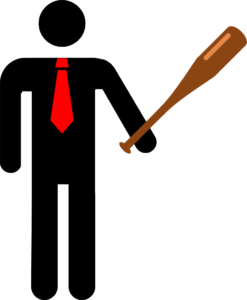 Obviously, management has ways to sanction employees. The details depend on your labor law code, but it usually includes the possibility of firing, or different levels of warnings and reprimands. Less regulated but still common are stern words, yelling, giving unpleasant tasks or undesirable work times, and so on.

The thing is, such negative actions rarely work. For example, terminating an employee contract is usually a last resort for grave offenses. If you fire everybody that does not do things to your liking, then you will soon run out of employees. Finding and training new employees is not easy, especially if the word gets around that firing is common.

Same goes for the other reprimands. Used sparingly and with just cause, they may have some effect. Yet, used indiscriminately for even minor oversights, they will quickly lose their effect. On the contrary, the reputation of the responsible manager will suffer, and he will it find even harder to implement changes in the procedures.

Overall, you have to realize a simple truth: You cannot force or threaten workers to do something against their will! Okay, they will do it when you are around and observing, but as soon as you are gone, it is back to their ways. Any example in history that I looked at got very messy when management tried to force workers to do something against their will. Henry Ford initially had a turnover rate of up to 370%, meaning they had to rehire the entire shop floor staff every three months. The workers in the Arsenal of Venice mostly ignored official directives. Laid-off French workers threaten to blow up the factory (example from 2009). I am sure you have lots of examples from your own experience.

Hence, since the stick does not work very well,  we will look at carrots in our next post. Until then, stay tuned, be nice and fair to your employees, and organize your industry!

P.S.: This series of posts is based on a question by Curtis Rosché (name mentioned with permission).