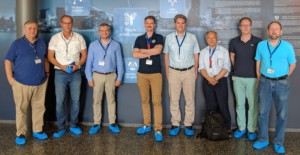 Recently I organized a non-commercial Industry 4.0 tour for some friends through my university, the Karlsruhe University of Applied Science. For the first week in July 2019, we rented a van and toured southern Germany. We visited fourteen different locations in five days to understand the current state of Industry 4.0 in Germany. Almost all of these locations were Industry 4.0 award-winning enterprises. However, our assessment of Industry 4.0 often differed from these awards. Since we all come from the lean corner, we often have a different outlook on things than people who specialize in Industry 4.0. Let me give you an overview of our tour:

The Van Full of Nerds 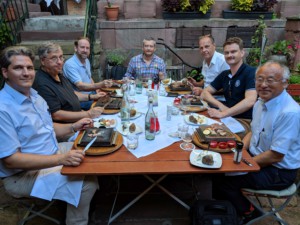 The group consisted of eight people from all over the world coming together for one week of studying Industry 4.0 and having fun. We called it a “van full of geeks” until one member pointed out that geeks are wanna-bes and nerds are the real thing, hence we renamed it to a “van full of nerds.” If you work in lean, you surely will recognize some of these names. We are (in alphabetical order):

Our week was quite packed with stops. Altogether during this fun week, we had fourteen stops in five days on our itinerary. Seven of them were plant visits, and another seven were presentations, try-outs, and demonstrations. Hence we had almost three study events per day! Here is the list of plants we visited in southern Germany to study Industry 4.0 (in order of the visits):

Most of these were near Stuttgart, but we drove up to three hours to see Siemens, the plant farthest away from our hotel in Stuttgart.

We especially liked the ABB-Stotz Kontakt plant, which we thought had the best Industry 4.0 approach, with a particular focus on finding out what really is useful for their factory. But overall it was interesting to see the different approaches used by the different factories. All of them had their strengths and weaknesses. In this series of posts I will focus on the positives, and glance over the weaknesses, since it is impossible to make a complete assessment of the plants.

We also had a few presentations, demonstrations, and try-outs. Below are these visits (in order of the visits): 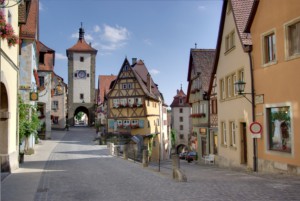 As you can see, it was quite a packed week with fourteen study events – and we even fit in a visit to the quaint medieval town of Rothenburg ob der Tauber. Overall it was a very educational and fun week. In the following I will look at some locations in more detail and show you what we saw, what we liked, what we didn’t like, and why.

This starts a series of blog posts about what we saw and what we learned. While I was influenced by and received input from the other tour members, these blog posts are written by me and hence may reflect my opinion more than the others, although on many points we agreed. In this first post, besides this introduction, I will give you a (very brief) look into Audi in Neckarsulm. 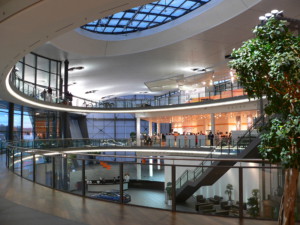 Our last stop on the tour was the Audi plant in Neckarsulm. This tour was one of the normal tours for tourists and customers picking up their new Audis, so it was not an Industry-4.0-specific tour. Hence there won’t be much detail. Subsequent blog posts on other plants will have much more details and information.

Anyway, the plant was very clean and highly automated, with 2,200 industrial robots. The mobile robots usually had nicknames to help their integration with the human workers. A car is completed every 162 seconds in two shifts per day. The teams had around six to eight team members for every team leader, hence nicely small teams. As the City of Neckarsulm grew around it, the plant suffered from a lack of space, so they built upward with production on three levels. Most of us had a good feeling about the plant. The presentation was very good by a highly enthusiastic presenter, but since it was geared to a general audience (mostly people picking up their new Audis), it did not contain much information on Industry 4.0.

So this is the first post on our van full of nerds. In my next post I will present ABB Stotz-Kontakt in Heidelberg. While all plants had strengths and weaknesses, we liked this plant best. Until then, stay tuned, and go out and organize your industry!

P.S.: Thank you very much to everybody who hosted us and showed us their plants and products!

13 thoughts on “Industry 4.0 Tour in Germany – A Van Full of Nerds – Overview and Audi”