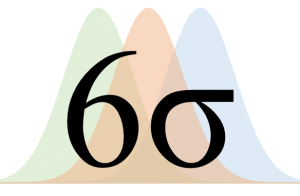 Lean Six Sigma (also abbreviated as 6σ) seems to be everywhere in industry nowadays. There are tons of consultants, job offers, projects, and articles about Lean Six Sigma. In this post, I would like to talk about where Six Sigma comes from, its difference from lean manufacturing, the reason for its popularity, and its shortcomings.

The Origins of Six Sigma

Six Sigma was originally a method for quality control, developed around 1986 at Motorola by Bill Smith. As such, it was a latecomer to the wave of quality control methods and tools that originated during World War II, like statistical process control, Total Quality Management, Zero Defects, and others. Six Sigma gained much popularity when General Electrics CEO Jack Welch introduced Six Sigma at GE in 1996, and it has been a consistent buzzword in manufacturing ever since. The graph below shows the likelihood of Six Sigma being mentioned in books. It started around 1985 with Motorola and really took off in 1996 with GE. (Source: Google Ngram Viewer)

The Fundamentals of Six Sigma

Six Sigma started as quality control. I have the feeling the underlying idea was a “more is better” approach, where they simply increased the demands on quality and increased the requirements on tolerance levels. Many quality measurements do have a normal distribution. The distance from the center of the distribution is measured in standard deviations, or Sigma. Six Sigma simply requires the tolerance limits to be at least six standard deviations away from the center.

However, Six Sigma realized that the mean is not always necessarily in the middle of the tolerance limits to begin with. Even if they are in the middle when measured, they may shift over time.  Hence they allowed an additional shift of the distribution by 1.5 standard deviations to either side. Therefore, the distance to the closest tolerance limit may be only 4.5 standard deviations.

Six Sigma Does Not Work

You may have noticed above that I am skeptical of Six Sigma. There are a number of reasons why I believe it does not work.

First of all, why Six Sigma? Why not five or seven? Same goes for the 1.5 sigma shift. Why 1.5 sigma, and not one or two? There isn’t really any basis behind it. I think the main reason is that the phrase Six Sigma is catchy. Six Sigma simply sounds better than Five Sigma. Additionally, this also sets a very high demand on quality. Often, in management and consulting, it’s popular to set extremely high demands, hoping that at least some of them will materialize, or to have a readily available reason for blame if the project fails. But overall, the demands are very unrealistic, which brings me to my next point.

However, nowadays Six Sigma demands are truly only 4.5 sigma due to the shift of 1.5 sigma as explained above. Now only 99.999660232684% of the parts have to be good. This means almost two thousand times more defects than before. Yet, taking the US population as an example again, only about 1,000 people would be hospitalized or incarcerated in the US. Still highly unrealistic in my opinion.

For reference, there are almost one million hospital beds in the US, of which around 0.5 million are occupied at any given time. This is the equivalent of 3.2 Sigma. If you prefer the incarceration rates example, there were 7.0  million adults in the correctional system in 2011 (2.2 million were in prison, with another 4.8 million on probation or parole). This is the equivalent of 2.3 Sigma.

No Consideration of Cost-Benefit

Six Sigma also completely ignores the relation of costs vs. benefits. To achieve even a relaxed 4.5 Sigma quality rate is expensive. Is it worth it? This depends heavily on the product, the market expectations, and the competition. Let’s take two illustrative examples, a pacemaker and a plastic fork.

A pacemaker should work reliably for a long time. Failure of the pacemaker can mean death, or at least a major operation to exchange the product. Hence the cost of a defect is rather high, and it may be sensible to set high quality requirements.

On the other hand, a plastic fork is a cheap and disposable utensil. If it breaks, it usually does not harm anybody and is easily replaced. Hence the cost of a defect is rather low. It is possible to make stronger forks, but this comes at a price. Yet plastic forks are purchased exactly for their cheap price and disposable nature. Therefore it makes no sense at all to have high quality requirements on plastic forks.

Six Sigma, however, makes no differentiation regarding the cost of defect or the trade-off between the price for quality and the cost of defects. There is also no mentioning of the time to market, which is also influenced by quality improvements. If there is no cost-benefit trade-off, everything including the plastic fork should have Six Sigma (i.e., 4.5. sigma).

Six Sigma is based merely on tolerance limits and standard deviations. However, merely complying with the tolerance limit does not necessarily mean that the product is good. The tolerance limits may be wrong. Combinations of limits within tolerance may in sum be outside a tolerance – or a critical aspect may not be measured or even be measurable, and has no tolerance limit. Six Sigma has the highly dangerous belief that if the numbers match, then everything is fine. This goes contrary to my lean experience that only the real product counts, and relying on numbers will go haywire.

Six Sigma was created by Motorola and GE. Motorola was going downhill, falling behind Nokia in 1998 and being split in two in 2011. Another company, 3M, significantly reduced Six Sigma because it was stifling creativity.

CNN did some analysis of Fortune 500 companies. Of the companies that started large Six Sigma programs, 91% have supposedly performed below the average of the S&P 500 since. Overall, many companies are reducing or have stopped their Six Sigma efforts. Please note that by this I mean the original Six Sigma standard deviation approach above, not the Lean Six Sigma described below.

In any case, Six Sigma is not the only one trying to get in the steering seat of the lean manufacturing bandwagon. Total Quality Management (TQM) also offers lean trainings, as does the German work optimization organization REFA, Total Productive Maintenance (TPM), Methods-Time-Measurement (MTM), and others. However, Six Sigma is by far the most successful organization doing so, since they had a stroke of genius . . .

In 1987, Six Sigma trainer Dr. Mikel Harry came up with a new, catchy name for his trainings: Six Sigma Black Belts. Now you don’t just get a certificate, you get a black belt. You are now almost a Bruce Lee of lean manufacturing. Or maybe not. In any case, its allegory to martial arts made Six Sigma trainings quickly become popular. Courses for black belts sold like hotcakes. Nowadays, there are a number of different belts you can earn, from beginner to champion level:

Try as you may, there is no official Toyota certification for being a lean expert (which would also go against Toyota’s philosophy on its production system). Yet our industry craves certifications. The next best thing is to be a current or former Toyota employee. However, there is a limited supply on Toyota employees, and to become one requires more than a one-week training course (I worked for Toyota for five years, for example).

Industry believes the second next best thing is a Six Sigma certificate. Subsequently, there is a significant demand in industry for Six Sigma black belts and so there are also numerous training courses offered by various institutions. However, I am convinced these are all nothing but a beginner’s training. You cannot learn lean manufacturing in a classroom with the exception of a few basics.

Do you remember when you learned to drive a car? With a few days’ worth of training, you were able to move around, hopefully not hitting anything else. But back then you were anything but a good driver. It takes years of driving to become truly proficient (and some people seem to never make it at all  😐 ). This is the same with lean manufacturing.  Even with a good instructor, a Six Sigma black belt training is nothing more than your learner’s permit. This doesn’t even consider the many instructors in Six Sigma who frankly have no idea what they are doing, or the many online Six Sigma courses of dubious quality.

I consider myself to have lots of experience in lean manufacturing, with many years at Toyota, McKinsey, and Bosch. This usually duly impresses others in industry. Nevertheless, I still occasionally get the question, ” . . . but do you have a Six Sigma black belt?” One day I swear I will take a $199 online six sigma black belt course just to shut those people up 🙁 .

Lean Six Sigma, on the other hand, is as successful or flawed as any other lean approach. In my view, they are all just (usually flawed) copies of the Toyota production system. They often rely too much on rituals and numbers, and not enough on common sense and shop floor observations. In this, Six Sigma has even a higher tendency to rituals (black belts), methods, and numbers (six sigmas) than others, and neglects the actual outcome and performance.

On the other hand, there surely are also Six Sigma experts who make a positive difference and know what they are doing, just as there are some lean experts who have experience. Hence, if you are doing improvement projects, I don’t care what you call it as long as it is done with common sense and shop floor observations. If you like the Six Sigma label, go for it. Just don’t expect me to be impressed by a fancy belt. Instead, do real improvement in real industry that shows lasting results! Similarly, if you are looking for support for your improvement projects, it doesn’t matter if it is someone calling himself Six Sigma or Lean, as long as he or she has experience. Unfortunately, a master black belt alone is not a certificate of experience, but merely a certificate of participation in a classroom training. Try to find someone who knows what they are doing, even though they usually are not the cheapest consultant available (see also How to Find a Good Lean Consultant).


I hope this post was interesting to you. Feel free to give me a feedback if you want. And now go out and organize your industry!

16 thoughts on “The Difference Between Lean and Six Sigma”