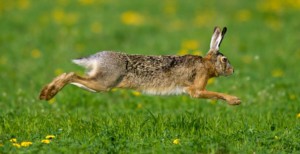 There are different ways to manage workers in an manual U-line. One of these methods is known as the “Rabbit Chase,” also known as the “Caravan Approach” or “Operators-in-Motion.” The workers always move in a circle and handle all processes in sequence.

The Rabbit Chase is a possible approach to organize manual work in a flow line. The worker moves along the line with his part. When the worker reaches the end of the line, he picks up a new part and starts again. Naturally, this works best for U-shaped lines, or in general lines where the end is close to the beginning of the line.

If there is only a single person working in the line, however, this would not (yet) be a rabbit chase. For a rabbit chase you need more than one person.  The image here shows an example with two workers.

You probably can easily see where the name “Rabbit Chase” comes from. The faster worker will be “chasing” the slower worker.

The direction in which the workers walk is very clear: they should go forward with the part! This way the worker processes one and only one part throughout the entire line. This has two advantages.

First of all, you need less inventory. If the workers walk backward, they would need a new part waiting at every preceding process. The line would have many more parts. The lead time would increase, without a corresponding increase in line performance.

Second, if the worker is responsible for one part from beginning to end, then the quality is probably better. When walking backward, any quality issue in a part will soon be the problem of the other worker. While the size of this effect varies, there may be a tendency toward a “no longer my problem” attitude. When walking with the parts, however, the part is the worker’s problem from beginning to end. 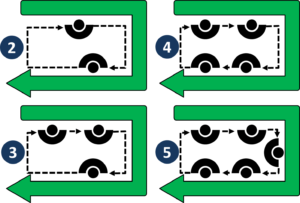 As for how many workers you want to add, it depends on the length of the line (or more precisely on the duration it takes for a worker to make a circle) and how much waiting time you are willing to accept. The exact relation is hard to determine. 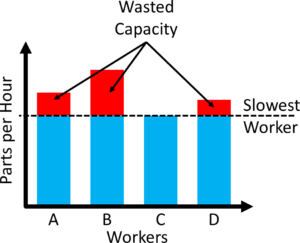 If you would (unrealistically) assume that all workers always have a constant speed, then the wasted capacity would be any capacity faster than the slowest worker. 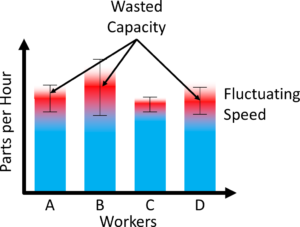 In reality, the speed of the worker varies over time. Sometimes he can work the process faster, sometimes slower. This is a natural variation of the cycle time that happens in most manufacturing lines. In this case a worker may sometimes be the slowest worker, but later may speed up again.

While this will not completely cancel out the problems of wasted capacity and waiting times, it will probably be much less than the case assuming a constant speed. Unfortunately, the exact value is difficult to calculate. Overall: Do not put too many workers in a rabbit chase line, or the waiting time may become too much. Some sources actually recommend no more than two workers, although I can imagine cases where more than two workers may be possible.

Let me give you a brief run-down of the pros and cons of a rabbit chase.

Overall, the Rabbit Chase style of managing a flow line may or may not be the best option for you. There are definitely situations where this may make sense, but in other cases there may be better ways to manage your line.

Anyway. As usual, I hope that this post was interesting to you. Now go out, chase some rabbits (or even better, improvement potentials), and organize your industry!

13 thoughts on “The Lean Rabbit Chase in a U-Line”