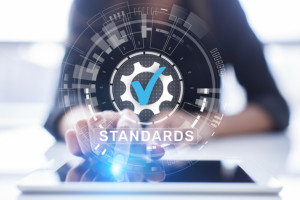 Standards are crucial to making your manufacturing system work smoothly. But where should you have standards? Sometimes you hear the answer, “Everywhere,” but this is not really helpful and I also think not really correct, either. Hence, let me talk a bit on why and where to have standards. This applies to all kinds of standards, not just the standardized work that is the most widely discussed one when talking about standards in lean.

Why Do We Have Standards?

Standards serve a very clear purpose. They aim to make a process or product more uniform and better. Ideally, every single item produced or every single task done is identical to the previous item or task. Additionally, the item or task is better than before. This could be related to the four main goals in manufacturing, which are safety, cost, quality, and delivery time. A standard aims to improve at least one of these four, often more.

In mathematical language, we aim to reduce the variability of a measurement while at the same time improving the average of our measurement. For example, for a work standard we want to figure out a better way to do it, and then have all workers do it consistently in this better way. Please note that I did not write “the best possible way,” as that is impossible. A core philosophy in lean is continuous improvement (kaizen), and hence you can never reach perfection, but should continually strive for it. If there would be a a perfect standard, then there would never ever be the need to improve it… which I just don’t believe.

For standards of manual work, this can also be expressed in a different, more functional way. There are two reasons to use a standard:

Please note that a standard does not replace the training of the workers! Even with a very good standard, proper training both in theory and on-the-job is important for a worker to do a job properly. Naturally, the standard can be incorporated into the training, but it is not a substitute. Later on, the standard only helps the worker to not forget an important step.

Where to Have Standards?

The next question is: Where should you have standards? Some people just like standards. They like to dot the i’s and cross the t’s, they like to count their beans individually, and they do it just because it is aesthetically pleasing. And since they want everything to be nice, they apply standards everywhere, down to the color of the underwear. I am not kidding. Many Japanese schools have a standard for the color of the underwear of their students (white, of course), and yes, they do inspect! Yikes! Cringe! Shudder! Also: Why???

Standards have a clear purpose, and that is NOT related to the aesthetically pleasing features of undergarment. A standard is for improvement! You should use a standard only if you want to improve something. If there is no need to improve, then there is no need to implement or change a standard. Hence, like almost everything in lean, you must start with a problem, or in some cases a foreseeable problem if you don’t have a standard or an improvement potential. And not just any problem or potential, but a relevant problem. Implementing or improving a standard is an effort, and you should try to get the most out of this effort. Hence, do not set out to create a standard. Set out to improve a process, which leads (often) to the creation of a standard.

However, please note that this includes situations where it is obvious that without a good standard there will be major problems soon. If you install a new assembly line, you better do a standardized work for the operators before it becomes a mess. If you buy potentially dangerous equipment, make a standard for safety before the first person gets injured or dies.

In lean literature it is often said that the problem to address and the standard to implement should be aligned with the company principles, or the Hoshin Kanri. This is true, but there are also often smaller changes or adjustments that are much less effort. If a quick fix makes it a little bit better, I may just do it, even though it may not be the most important problem the company is facing. If I have to pick a problem among many different possible issues, I do a impact effort matrix. I try to identify the problem with the biggest bang for the buck, even if it is only a small “bang” but for a small” buck.”

But again, focus on your problems! Pick your battles! The problem solving and the standard must aim to make your company better. It must improve either safety, cost, quality, or delivery time (or a combination thereof).

Even if you encounter a problem that you want to address, it does not automatically lead to the creation of a standard. After you pick a problem to solve, check if there is already a standard that is applicable. If not, you may have to create a standard. Please note that when I say “create a standard” or “improve a standard,” this implies a lot of other activities. It is not only writing down how it is supposed to be, but it is primarily a problem-solving process, where the creation or updating of a standard is one of the later steps. More on this in the next post.

If there is a standard, check if the standard was followed. If so, you may have to update or improve the standard. If it was not followed, would the standard have worked? Make sure to ask the operators about their opinion before deciding if the standard would have been good enough. Especially if it is a standard primarily created by management (not good in the first place), the tendency is to blame the operators (even worse), even though it is the standard that was simply not good enough. Unfortunately the culture in many companies is, if there is a problem, they first look for somebody to blame. Put your energy into problem solving, not into blaming others. 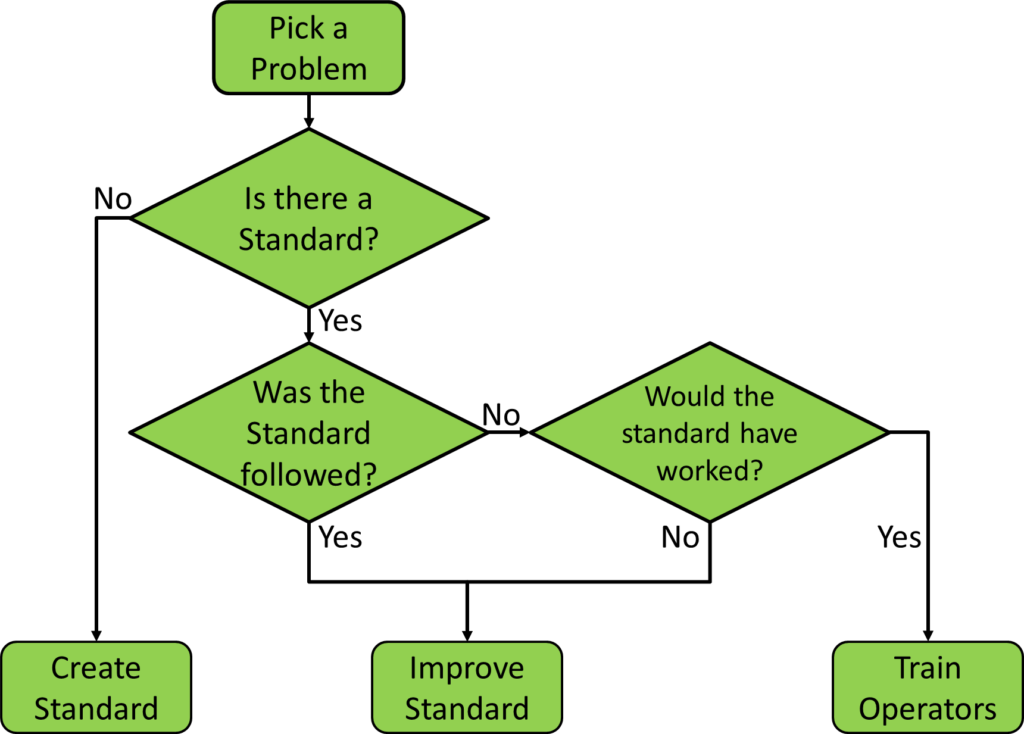 Using this approach to use standards as part of the problem-solving tool, Toyota even standardized their standardization approach. Standards are one of the key parts of improvement. As Taiichi Ohno has said, “Where there is no standard, there can be no kaizen.” It is much better to have a few good standards than many inferior standards. Quality before quantity! In my next post I will talk in more detail on how to create a standard. Until then, stay tuned, and go out and organize your industry!

Many thanks to Osamu Higo for writing the excellent article Crucial Misconceptions on Lean – Standardization, which inspired this series of blog posts.

6 thoughts on “Standards Part 2: Why and Where to Do Standards”