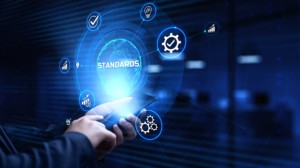 Standards. You know they are important for manufacturing. You know Toyota and hence lean uses them extensively. But you may also know that they are not easy. I was thinking about writing a few blog posts on standards for a long time, but… it is a challenging topic. Let me give you my thoughts on standards and how to use them in lean manufacturing. But before going deeper into the use of standards over a few blog posts, I’ll provide a quick introduction on standards.

According to the dictionary, standards are “something established by authority, custom, or general consent as a model or example.” Standards make all kinds of things a lot easier, cheaper, and safer, often without the end user even knowing the standard. Imagine if there were no standards for power outlets. And I don’t just mean different standards that you see when you travel internationally. You would have to fiddle around with wires to connect to an unknown voltage, hoping that it works for your device. This is somewhere between annoying and deadly. No wonder the electricity grid was standardized early in the 20th century… albeit different countries use different standards, or even different standards within the country (Eastern Japan has 110V at 50Hz and Western Japan has 110V at 60hz, leading to blackouts after the 2011 Tōhoku earthquake and tsunami, where the west had enough electricity but couldn’t get it into the eastern network).

Standards may have different ranges where they are valid. There are, for example, international standards that are used worldwide. The metric screw standard is one such example (and yes, you can get them even in America, even though the unified thread standard is more common). Since these are so common and need to be interchangeable, the same standard may be used all over the world, and could be called a norm. Other standards are used only within a country or region, or within one company, within a plant, or may apply to only one machine or process in the company. For example, if your company has a press, there may be a standard on how to change the tools. This standard may apply to only a single press in one plant of one company.

Standards could be mandatory. For example, your car has a lot of safety features that are legally required. Other standards are optional, and if you don’t like metric screws, you can opt for a Whitworth or unified thread standard, or even make your own. Hence, this is optional. Although, using a metric screw would be also sensible (except the US, of course). However, later when we dig deeper into standards in lean manufacturing, I will strongly advise against “optional” standards. If you create a standard in your plant, then this standard should be followed, even if it is only within your plant, or even a single machine in your plant. If you make a standard in your plant but make it optional, then you would not have needed to bother with a standard in the first place…

There are also different applications of standards. Some are standards for parts. Take again the example of the standard metric screw (a standard for a part). The standard defines the geometry of the thread. The screw pictured here would be ISO (International Organization for Standardization ) 3014 standard for a hex head screw with a shaft, using a metric M12 thread based on ISO 261, made from steel with 8.8 strength according to ISO 898, and galvanically coated with zinc which could be ISO 14713 (although I am not sure on the last one). For more complex machinery, the function can also be standardized. For example, your car headlight has standardized tolerances on how bright it can be or what color it can be. In Europe this is regulated in the ECE R48 (where UNECE stands for United Nations Economic Commission for Europe but is usually shortened to ECE).

Other standards are for processes, where not the product is standardized, but the use of a product, tool, or machine. Here I would like to distinguish between processes done by a machine and processes done by humans. Machine processes are, for example, settings for machines. You may have a standard for the temperature, pressure, and speed for your injection molding machine if you use a certain type of polymer with a certain mold. Finally, there are manual processes, where humans handle a product, tool, or machine. For example, the sequence of steps to change a press tool could be standardized as part of a SMED changeover optimization. This is actually the focus of the subsequent posts since this is often trickiest to implement. It is easier to standardize the shape of the speed limit sign than to have the human drivers actually follow the speed limit.

A lot of lean literature focuses in particular on the standards for manufacturing or assembly work. This is called standard work, or slightly better standardized work. With standardized work, you set up the standards for the different workstations so they can match the customer takt time. I have written quite a bit related to this in my series on Toyota Standard Work, but I will add a bit more in this series. Standardized work is differently from a work standard. A work standard tells you how to do a certain task. Standard work is an approach to fit the tasks into a customer takt time. However, these two are often confused, and I have to admit that I sometimes mix up these two terms too. In any case, standard work and work standard is very similar.

There is also the term leader standard work, albeit it is much fuzzier. In general, it is a standard on how the leader (i.e., the manager, supervisor, etc.) has to do his work.

Of course, there can also be a combination of part, machine processes, or manual processes in the same standard. The operator has to use a M12 screw when changing the press tools and set the machine to certain process parameters.

There are more ways to distinguish standards. A standard could tell you exactly what to do. For example, you must install the part in one certain orientation.  A standard could also tell you exactly what NOT to do. Do not touch the 220 volt contacts! Finally, standards can give you a permissible (or forbidden) range or a tolerance. For example, the screw needs to be tightened with a moment between 30 and 42 Nm. Or your car must not be loaded with more than 550 kg.

Overall, there are many different types and uses of standards. In its basics, a standard is a set of rules that the people agree to always use. In my next post I will discuss in more detail why and where to do standards. Now, go out, look at your problems and possible standards to counter them, and organize your industry!

Many thanks to Osamu Higo for writing the excellent article Crucial Misconceptions on Lean – Standardization which inspired this series of blog posts.

2 thoughts on “Standards Part 1: What Are Standards?”