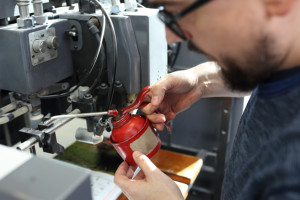 Maintenance is good. Maintenance is useful. But like all other tools, the wrong type of maintenance can cause more problems than it wants to solve. Hence, in this post I would like to point out some of the flaws of Total Productive Maintenance (TPM). Don’t get me wrong. TPM is useful and has its strengths, but it also has its weaknesses. You need to know both to use TPM properly. I am looking forward to your input in the comments, as I am sure I will learn something.

A Brief Critique on the Structure of the Pillars of TPM

Total Productive Maintenance is often based on eight pillars, although some use seven and others use nine, and they are not always the same. Regardless, these pillars contain a lot of good ideas. However, the structure of these pillars is a bit wobbly. Most pillars describe how to do maintenance. However, with the administrative & office maintenance, they stray from the “how to” to the “where.” This would open up another box of topics, which could contain many more areas like logistics, services, healthcare, and so on. Hence, to me it fells like it is either excessive or incomplete.

I would also take 5S out of the foundation, as it is not such a critical method for me. (Useful? Sure! But foundation material? Probably not). Instead, the pillars of focused improvement (or continuous improvement), education and training, and safety, health, and environment are much more overarching, and I would move them into the foundation.

TPM often sees itself as the overarching topic in manufacturing, and from the TPM point of view everything else is second to TPM. A similar example would be Total Quality Management (TQM), which often sees everything else as second to TQM. As I am a lean guy, I of course see everything else as second to lean. Well… I am trying not to, but sometimes it slips in. Depending on your view, you can see TPM as a (group of) tool(s) or as the whole toolbox. If you see TPM only as one set of tools, then topics like focused improvement (kaizen), education (standardization), and possibly also quality maintenance would be not part of TPM but part of the bigger toolbox.

Don’t get me wrong. All of these are important topics. Just make sure you don’t do redundant activities. If you already have a good approach toward continuous improvement, do not create a second one just for TPM, but have TPM as part of your overall improvement approach. If you already have a strong quality program, don’t establish a second one with TPM, but have the quality part of TPM as part of your overarching quality efforts. It all depends on which topic is “big” at your company. A quality guy sees quality as the most important aspect of a company. A maintenance guy sees maintenance as the most important aspect. A lean guy like me… is obviously correct and lean is the most important topic in the world </sarcasm>. In any case, make sure neither to overlook these topics nor do them redundantly.

A Better Version of the Pillars? 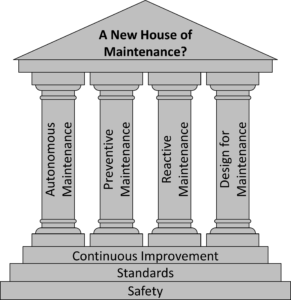 This is not a variant of the pillars of Total Productive Maintenance, but something different. I am also not a big fan of drawing houses, but maybe it helps you to see which parts I consider important and which ones less so. This house is also not perfect and has for example overlap between preventive/reactive maintenance and autonomous maintenance. Yet, I like it better than the old one. Again, just for fun.

A Warning on Maintenance in General 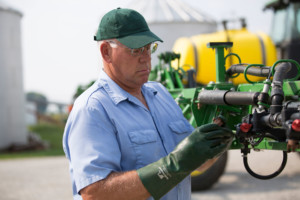 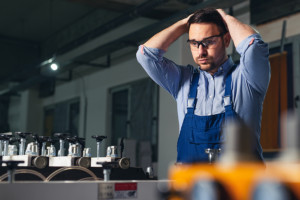 4 thoughts on “An Alternative Structure for Total Productive Maintenance”