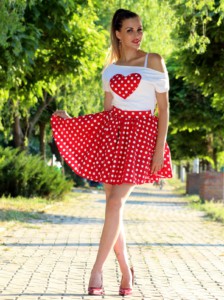 POLCA stands for Paired-Cell Overlapping Loops of Cards with Authorization and was developed by Rajan Suri around 1990. It is sometimes mentioned alongside kanban and CONWIP as a production control system. Let me explain to you how POLCA works. In my next post I look at the pros and cons of POLCA. In my last post of this mini-series, I will show you the calculation for the number of POLCA cards, including some critical comments.

The similar-sounding word Polka is also a Czech dance music and textile pattern, hence the colorful illustration of the polka dots on the left (don’t worry, more technical diagrams will follow below).

POLCA is designed for job shops, systems of work centers, or systems of cellular manufacturing of high-mix low-volume or customized parts. The jobs may move differently from machine or cell to another machine or cell. Between each possible pair of machines or cells, POLCA establishes a loop similar to a kanban loop. However, instead of kanban or CONWIP, these cards are called POLCA cards. As the name implies, these loops are overlapping. You also need to calculate the order release dates for the different jobs at each cell or machine.

A simple example is shown below. A product came from machine M1 to M2, and will go to M3 next. Coming from M1 to M2 the product had the M1-M2 POLCA card attached to it. Continuing to M3 it will receive the M2-M3 POLCA card from the subsequent loop. The product will be processed at machine 2 only if a) there is a M2-M3 POLCA card available and b) the order release date for this product on M2 has passed. If either the product order is not yet released for M2 or there is no M2-M3 POLCA card, the order will not start at M2. 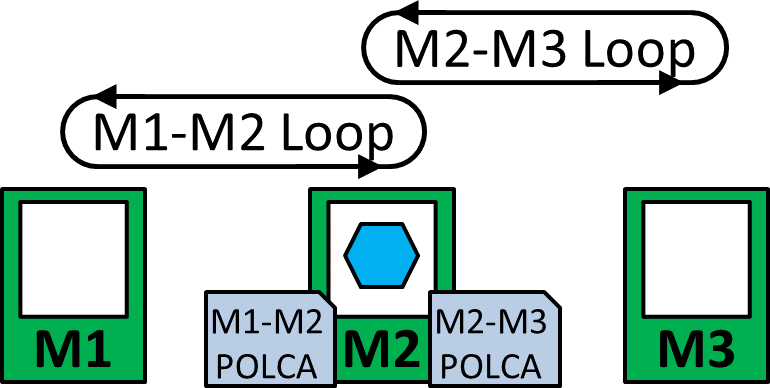 Once the product at M2 is completed, the M1-M2 POLCA card goes back to M1 to permit the processing of the next product at M1 (a loop can have multiple POLCA cards). Hence there is a pair of loops with POLCA cards that overlap at every machine or cell, hence Paired-Cell Overlapping Loops of Cards. 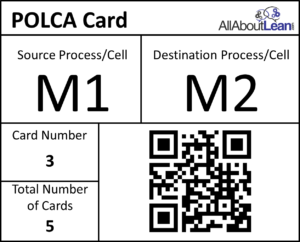 There is little information needed on a POLCA card. Most important are the source process and the destination process. For management it is also helpful to know the index number of the card in the loop, and the total number of cards in the loop. A barcode can also help.

Please note that this card does not necessarily have to represent only one item. A POLCA card can also be used for batches of material. If your batches get too large, however, you may consider using multiple POLCA cards for large batches.

For larger systems it may be better to implement these cards virtually in an ERP or similar computer system, where a computer keeps track of the cards as well as the release dates.

The operator has to follow a few simple rules in using POLCA. Suri calls this the “Decision Time.” These rules are also shown in the flowchart.

In the original literature on POLCA (sources below), it supposedly works only with manufacturing cells (although it is not defined what exactly the author sees as cells). However, as described in more recent literature, it would work also for any general job shop with multiple machines or processes. It would even work for a larger system where different sub-units are merged together. It is not suitable for flow shops. It is also not really helpful for mass production.

POLCA is sometimes called a push-pull hybrid. While the author uses an, in my opinion, incorrect definition of pull in his book (see my post The (True) Difference Between Push and Pull), the result is correct. The number of POLCA cards limit the inventory to a hard upper limit between two processes. The multitude of possible process loops does water it down a bit, but this is still pull. The order release time calculated by an ERP system, however, is definitely a push aspect of production. If it would only be the order release time, it would be easy to overstuff the system with jobs. However, since both the order release time and the POLCA card are needed for processing, it is in the end still a pull system.

So, after explaining to you the basics of POLCA, in my next post I will do a bit of a review of the advantages and limitations. Overall it is a feasible method. In my last post I will talk about the way to calculate the number of POLCA cards, where I may be a bit more critical. Overall it is up to you to decide if this method will work for you or not. Nevertheless, I hope this is insightful to you. Now, go out, and organize you industry!

While doing my research I also found the book by Hermann Lödding helpful, although to my knowledge it is available only in German: Lödding, Hermann. Verfahren der Fertigungssteuerung: Grundlagen, Beschreibung, Konfiguration. 3. Aufl. 2016. Berlin Heidelberg: Springer Vieweg, 2016.

P.S.S.: I would like to thank Rajan Suri for his input and his patience.

3 thoughts on “What Is POLCA?”