It was exactly 100 years ago today that Frederick Winslow Taylor died. He is considered the father of modern scientific management, the first management consultant, president of the ASME, and the first management guru. He invented and patented the first modern tool steel, designed new golf clubs, and optimized the growing of grass. He could swear like few others, but he also won the US Open tennis championships.

His work was already controversial when he died, but nobody doubts the enormous legacy he has left for industry. Without his achievements, there would be no modern manufacturing.

Until the end of the nineteenth century, coordinating work on the shop floor was based purely on experience. There was little understanding of the relations between work, time, and cost. While modern science started already around the sixteenth century, it was only with the steam engine in the eighteenth century that science entered product design. Nevertheless, by the beginning of the twentieth century, science has barely touched the art of manufacturing.

There were some discussions like Leonardo da Vinci measuring the speed of shoveling (500 shovels of soil per hour) and extrapolating the number of men and time needed to dig a canal. English mathematician and engineer Charles Babbage not only invented the first mechanical computer, but he also wrote probably the first book on manufacturing science, On the Economy of Machinery and Manufactures. However, it was up to Taylor to expand these ideas and put them in the limelight of manufacturing.

The Life of Taylor

Frederick Winslow Taylor was born on March 20, 1856, in Germantown, Pennsylvania (hence you just missed the 159th anniversary of his birth yesterday 🙂 ). His parents were from a well-to-do and cosmopolitan family that traced its roots to the first settlers on the Mayflower. He went to school in Germany, France, and at a private school in the US, and was destined to become a successful upper-class lawyer like his father.

He also participated in stage plays, and had an enormous reputation for his ability to swear while still being classy. He also won the tennis doubles tournament of the US Open Championship in 1881.

However, eye problems forced him to change his paths, and he became a lathe operator at the Midvale Steel Works in 1878. There he quickly climbed the ranks and became chief engineer in 1884.

It was at Midvale Steel Works where he developed his first ideas on scientific management, or what he called “task management” or “Taylor System.” It all started with a detailed study of the work, breaking it down into small steps. Unnecessary tasks were disregarded, the technical aspect optimized, and the entire process adjusted for problems and deviations. The time and skills needed were also taken into consideration, and the salaries were adjusted accordingly. The result was clearly defined standards for the workers.

He tried it first in the lathe operations shop, where workers according to Taylor’s estimate worked only one-third of what they could and intentionally slowed down. Taylor requested that each worker worked at the speed Taylor though appropriate or get paid less. Resistance was fierce. Taylor fired scores of people, lowered salaries significantly, and received death threats, but since he himself worked as a lathe operator for years he knew all the tricks. Besides, Taylor never avoided a fight or gave an inch if he thought himself right (and he usually felt he was. See also his battle with Frank  Gilbreth in my post on The Tale of Taylor and Gilbreth).

Eventually the workers gave in and increased speed, but they also intentionally increased scrap rates to prove that the speed was not possible. Hence Taylor fined them for broken tools and parts, with the money going into an welfare fund for the employees. He even fined himself when he accidentally broke a part. After three years of heated conflict between the workers and Taylor, the workers eventually gave way in the face of Taylor’s determination.

Taylor also thought about the role of a foreman when he himself was a foreman. Back then the foreman did all the organization, from hiring and firing to production planning, setting targets, checking quality, and so on. He saw that these tasks were too much for one person and envisioned the split of these tasks to eight different people. Four of them he saw on the shop floor:

The other four he saw within a planning department:

While Taylor never implemented this in all its rigor, it is pretty much the structure we have nowadays with foremen, quality department, maintenance, production planning, work instruction, human resources, and management.

Taylor left Midvale Steel Works in 1890. As it happens all too often, with the main driver gone the standards started to slip, and eventually the old system of slow work took over again.

Taylor worked briefly for a financial company, but he disliked bankers ever afterward. To make ends meet he offered his services for focusing on shop management and cost reduction as a “consulting engineer” from 1893 onward, hence becoming the first management consultant. 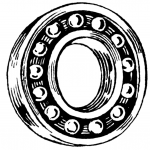 One of the things he soon found out was that reducing working hours actually increased productivity. He wanted to reduce daily working hours from 10.5 to 10 for the same salary and production quantity for producing ball bearings. Initially the working girls refused, but again Taylor’s stubbornness prevailed. Work times were reduced from 10.5 to 10, to 9.5, to 9, and eventually to 8.5 hours. Most surprisingly, daily production quantities increased, as did quality.

In 1898 Taylor started full-time consulting for the Bethlehem Steel Company. It was at Bethlehem were Taylor did his pig iron experiment, probably his best-known example of scientific management.

Bethlehem Steel had tens of thousands of tons of pig iron in a yard that needed to be loaded onto railroad cards. The task was as simple as one could imagine. The worker picked up a 40-kilo piece of iron from the pile, walked to the railroad car and up a ramp, and dropped the iron before returning to the pile. This was, for Taylor, the perfect setting to demonstrate his scientific management approach. Over time he optimized the process, experimented with different intervals of rest and work, and looked into great detail in the process.

He calculated that a man should be able to load 48 tons per day, while currently they were loading only 12.5 tons per day. He focused his efforts on a single mentally sluggish worker, Mr. Schmidt (his real name was actually Henry Noll). Giving him detailed instructions combined with salary incentives, Mr. Schmidt was soon loading 47 tons per day. Later researchers, however, found many statistical and historical loopholes in the story, and it seems that Taylor may have polished his results. In any case, his efforts saved the company around $6.05 per day, much less than the cost of Mr. Taylor. (On a side note, Henry Ford would have just installed a conveyor belt.)

Also, Taylor was able to implement his ideas only with the lowest salary levels that offered the least resistance, and completely failed anywhere else. Hence after three years of work, there were little results. His protégé, Henry Gantt, however, did significantly improve productivity by using a much more cooperative approach than Taylor. Therefore, when Taylor returned from a holiday in 1901, he found the following letter on his desk:

Taylor took what you would call nowadays a time-out, built a house, and focused on gardening – although he did not switch from his scientific mind. He patented a method for moving and replanting large trees with their roots. He scientifically analyzed the growth patterns of grass depending on the soil conditions, conducting thousands of grass-growing experiments. He also designed a novel two-handed putter and other golf clubs.

In 1906, to his surprise, he was elected president of the ASME. It turned out that the ASME wanted to reorganize itself and thought Taylor was the best man for the job. He started with lots of motivation, but as it turns out, academics are much more stubborn and resistant to change than any lathe operator. His presidency lasted only one year and did not end on good terms. While before his presidency the ASME published many articles on Taylor’s methods, there were almost none published afterward.

Nevertheless Taylor promoted his work, wrote papers, gave college lectures, and published his most influential book, Scientific Management. In the winter of 1912–13, he caught a cold which he could not get rid of, and he died of pneumonia 150 years ago today on March 21, 1915.

Taylor advanced many fields in industry and science, from metallurgy to gardening. But he is best remembered for his approach to scientific management, also known after him as Taylorism. He was the first who really used scientific methods to improve manufacturing efficiency (albeit with mixed results and some possible number fudging). He was the first to separate the task of managing work from actually working, dividing the management up in different specializations. He started the whole branch of management consulting, and was arguably the first management guru. His methods may also have been the first management fad.

Yet he was very controversial and often hated by workers and unions. While he was not loved, he did earn the respect of the workers that knew him. He was condemned by unions, who saw his methods only as a trick to lower wages, as a slave driver. However, this is not fair, as Taylor always tried to set proper wages and share the earnings with the worker. Yet, others that used his methods all to often indeed did use it as a tool to lower wages. However, Taylor did often have a low opinion of workers and rejected their ideas. For example, he said that, “You are not supposed to think. There are other people paid for thinking around here,” which would be just the opposite of lean manufacturing.

Hence the term Taylorism is often seen in a negative light. However, his achievements not only expanded the ideas of modern manufacturing management science, but he also pretty much singlehandedly created the field. Despite the controversies about him and his methods, he is one of the great contributors to modern management.