Fifty years ago today, Lillian Evelyn Gilbreth (May 24, 1878 – January 2, 1972) passed away. She was an early pioneer in optimizing and streamlining work, which is especially remarkable in a time when women were supposed to be at home in the kitchen instead of pursuing science and engineering. I already wrote briefly about her, her husband, and Frederick Winslow Taylor in my post The Tale of Taylor and Gilbreth. I also have her portrait, among other key people in the history of manufacturing, hanging in my office. Let’s have a look at the life of this very remarkable and outstanding woman! 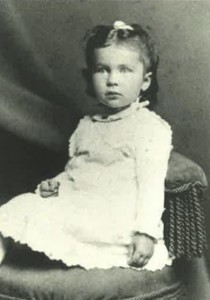 Lillie Evelyn Moller was born on May 24, 1878, in Oakland, California, to a successful family of German ancestry. Her parents were Annie (née Delger) and William Moller, who sold building supplies. The second oldest of nine children, she was first educated at home, but later did very well in school and graduated with exemplary grades in May 1896. Her father was hesitant to send her to college, but Lillie was able to persuade him. In 1896 she started studying at the University of California.

As it turned out, Lillie also excelled in college. She obtained a bachelor’s degree in English, but also studied Spanish and psychology. She won a prize for poetry. When she graduated, she was also the student speaker at the commencement in 1900, the first woman to do so at the University of California.

These intellectual pursuits suited her, and she did not want to become a housewife. She moved to the other side of the USA and enrolled in graduate school at Columbia University in New York City. She also started to use the more formal name Lillian instead of her actual birth name, Lillie. However, because she got sick with lung problems, she had to move back to California, and received a master’s degree in literature from University of California in 1902.

Next she started a Ph.D., also at the University of California. During that time she got married to Frank Bunker Gilbreth in 1904 and moved to New York. Even though she completed her Ph.D. degree and her dissertation, she was not awarded a degree due to a technicality (residence requirements for doctoral students). However, in 1915, after her marriage, she obtained a Ph.D. in applied psychology at Brown University.

During her Ph.D. studies, Lillian also traveled in Europe. During this time she met Frank Bunker Gilbreth in Boston in June 1903. (Lillian’s travel companion was a cousin to Frank). They got married in October 1904 and lived in New York, then later in Rhode Island and New Jersey. 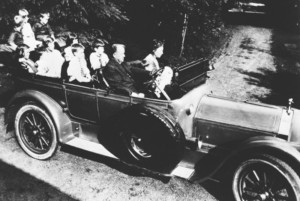 Frank and Lillian wanted to have a big family, and, oh boy, yes they did. Some popular sources refer to twelve children, and there is a book and two movies about their lives titled Cheaper by the Dozen.

Depending on how you count, however, you may end up with anywhere between eleven and thirteen children. One was stillborn without even a name, and another one died young at age six. Since two died before the last eight were even born, at most you will see eleven children on family photos (see here for a list of children). Anyway, having never given birth myself, I think thirteen children is nevertheless quite an achievement!

Frank Gilbreth was a pioneer in scientific management and motion studies. He and his wife pioneered the study of work using photography and film, which in the 1920s were still cumbersome tools. They worked in the same field as Frederick Winslow Taylor, albeit their opinions clashed heavily.

In my view, while Taylor is more famous, the Gilbreths actually did better work. Taylor fudged his numbers to suit his desired results, and had enormous difficulties with differing opinions. See below for one of Gilbreth’s original videos, which are still highly interesting.

Frank and Lillian’s work and consulting was much more applied. Especially Lillian focused on the highly important human side of work, researching and consulting both industrial psychology and human fatigue (nowadays called ergonomics). A lot of their methods are still in use today (for example, the familiar scene of surgeons getting their tools handed by assistants rather than turning around looking for tools themselves). This shortens the duration of the surgery and increases the chances of survival.

One important part of their work was time motion studies, where Gilbreth developed eighteen therblings for different tasks to estimate the time of a manual process. Nowadays these are no longer used and have been replaced by MTM (Methods Time Measurement). They also published numerous books and papers together, although often Lillian was omitted as a (co-)author.

Frank died of a heart attack in 1924. This put Lillian in the difficult position of both running their consulting company AND caring and providing for eleven children between the ages of one and nineteen. It did help that they also used the same ergonomic and efficiency methods from industry in their private household, and they detailed timetables for who was allowed to use which bath and when, combined with standards to reduce movement and hence waste during hygiene and household tasks.

Losing her husband and business partner put Lillian in a difficult spot. The industrial world in 1924 was still very much male dominated, and most businessMEN didn’t know how to deal with a capable woman in industry. Their three biggest clients did not renew their contracts after Frank died.

As a result, she focused on (or was pushed toward) industrial areas where businessMEN of that time had no clue and desperately needed help: the design of household appliances and kitchens. This is almost ironic, since Lillian despised housework and left this to hired help.

She was heavily involved in the design of the modern kitchen, and is credited for inventing the foot-pedal trashcan, wall mounted light switches, and shelves inside of the door of a refrigerator.

She also advised for the government during World War II, and was a good friend of President Herbert Hoover. She was an accomplished speaker and also a lecturer, and in 1935 a professor at Purdue University as well as other universities.

Lillian was groundbreaking in the field of industrial engineering and as a general role model for women in industry. Many awards are named after her. She is shown on a US mail stamp in 1984, and in 1995 was introduced to the National Women’s Hall of Fame. Her life and her achievements are much more than what I can fit in a blog post, and she deserves her own book (a book on The Gilbreths by James Gifford is in the works). Now, go out and organize your industry!