Often, implementing “lean” means management is picking the latest lean-related buzzword and telling their people to implement it. This is wrong on so many levels. For one, a lean project should always start with a problem, not a solution. On another level, good manufacturing is all about the nitty-gritty details. Both normal operations and improvement projects need a lot of attention to details. Unfortunately, this is frequently lacking in many companies. In this post I would like to show you the level of detail for operator training in some excellent companies.

Toyota, like most companies having assembly, uses a large number of screws. Therefore, it makes sense to train the operators in the handling of pneumatic or electric screwdrivers.

Now, in other companies the operator training would be done in 10 minutes by giving the new operator the screwdriver and telling him which holes to put screws in. However, this leaves lot of ambiguity that can cause potential quality problems later on. Is there a sequence of screws that is better than others? What is the best way to hold the screwdriver to avoid its slipping off the screw and scratching the material underneath? What is the best way to make sure the applied torque is neither too small (and hence not good enough) nor too strong (and risking a ripped off screw). What is the easiest way to get the screwdriver on the screw? Finally, how can the screws be attached in the most efficient manner, yielding good quality and using minimal time and effort?

To train their operators in all these details, Toyota has set up separate training stations where operators practice the process in a safe environment. A trainer coaches them on how to hold the screwdriver, shows them all the things that can go wrong, and overall tries to improve the operator from someone holding a screwdriver to an expert screwdriver operator.

Besides training the operator, this also shows if the new operator can handle the operation. While assembly is usually a lower pay grade, it is by no means easy. The operator has to focus despite the frequent repetition of the tasks. If there is a mismatch, it is better for both sides to find that out early in training, rather than later after quality problems.

Toyota also has lots of small training on how to handle objects to train muscle memory. The operator practices handling of parts in a simulation environment to make the movements routine. This is similar to you driving a car. You also no longer need to think where the turn signals are and which pedal is the brake; you just do it.

One such game is “Flip and Place.” There are 20 cylinders on a 40×30 cm board, each in its own 7mm deep indentation. One side of the cylinder is red, the other one is yellow. The goal is to flip them as fast as possible. To optimize your time you have to think about such mundane things as how to grab, hold, flip, and place the cylinder. One of the winning strategies is to pick up the cylinder with one hand, and place it with the other hand, flipping it during the handover process.

Another game, the “Gromet Game,” aims to put 10 pegs of 5 different sizes (from XS to XL) into matching holes. The pegs have only a slight difference in size, but fit only in the hole of the matching size. Please note that they do not provide the helpful size diagram as shown in my image – you have to figure out yourself which peg goes where. 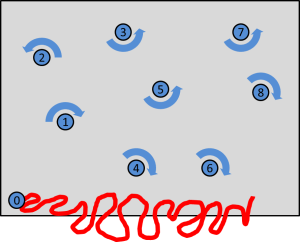 Yet another game is the “Rope Game.” On a 120cm wide board, 9 pegs are placed. The first peg is connected to a rope. All the other pegs have a number and a rotational direction. The goal is to wind the rope around the pegs in the correct direction as quickly as possible.

Overall, Toyota puts a lot of effort into training their people. This training is usually done NOT at the assembly line, but separately with close supervision. Toyota wants their operators to make the largest steps on the learning curve in the classroom, rather than by trial and error with real products for real customers. After all, you don’t want to buy a car from someone that has just assembled a car for the first time 😉 .

Scania, a large Swedish manufacturer of trucks and buses, also seems to be one of the few companies where operational excellence and lean thoughts are well implemented. During the European Lean Educators Conference 2015, I received a tour of their operator training area in Södertälje, near Stockholm. Since I was allowed to take pictures, I can show you their training in more detail than with Toyota.

Trucks use a lot of pipes and hoses. There is a dedicated station on how to assemble these pipes.

The correct cross sections can be achieved easily using the correct tool. This tool (shown on the left) not only avoids squishing, but also ensures a perpendicular cut, both of which are difficult with bolt cutters (shown on the right).

Now, you may think that simply taking away all bolt cutters and telling the operators to use the right tool may suffice. It does not, at least not for an excellent company. Having experienced the difference makes it much more likely that the operator remembers the importance of using the correct tool.

Additionally, at the station, the haptics of assembling pipes are not simply explained; instead, they are experienced. At this training station, the operator also learns how a good connection feels, and how to distinguish it from a bad connection.

At another station, the operator learns how to correctly attach cable ties. Again, this sounds simple, but there are many details to pay attention to, all of which are remembered better if experienced rather than heard. Hence, the operator first learns about different types of ties (heat resistant or not, specialty ties, etc.) and then practices using cable ties on different aluminum poles.

Again, the training starts with the things that can go wrong. If the cable tie is tied by hand, it will not be strong enough and can slip. In the picture you can see three cable ties, only one of which is properly tightened.

Cutting off the end of the tie is also difficult using a simple bolt cutter. There may be an edge sticking out. If the cut is not even, there may be a sharp edge that can scratch and injure a person. The image also shows the same three ties as before, only one of which is good.

To correctly tie the cable tie, a special tool is used (having the lovely Swedish name, buntband pistol). This tool not only applies the correct torque, but also cuts the remaining tie evenly.

Finally, there is also a screws and nuts training station. With screws, one of the important things is the torque applied on the screw. As before, the operator first learns how NOT to do it.

In particular, the trainer asks the operator to apply a certain torque to the screws. The trainer measures the torque on a display out of view from the operator. As it turns out, the operator is usually far off the required torque, applying either too little or too much. This is often especially surprising to more experienced operators who thought they had the feeling for the correct torque.

Of course, this becomes much easier with a special torque wrench. However, even then it is possible to mess up. The torque wrench clicks when the correct torque is applied. However, if you continue to pull, it will exceed the torque. Similarly, if you “click” a few more times, you add more torque to the screw than necessary. Here again, the operator learns through experience.

Without much explanation, here is the logistics training area and the electrical contact training area at Scania. They use the same principle as the stations above.

In a truly good manufacturing company, attention to such tiny details can make the difference between average quality and exceptional quality. By providing operator training in a simulated environment, quality can be improved. Additionally, efficiency is also improved, since operators can be taught how to do things more efficiently and hence faster.

Yet, the above descriptions can give you only ideas on how to improve your own system. If you merely copy the above – regardless if Toyota or Scania – then again you are not paying attention to details. Your manufacturing system may have completely different needs and requirements, and the above may or may not match your needs. There are few shortcuts in lean. Don’t just copy the above stations; make your own journey.

However, there are a few things that will help. First, you should start by showing bad examples. Learning from mistakes is much easier than learning from good examples. You should also orient the training to the operator needs. It is easy to overload the operator with too many requirements, and you may end up with none being followed. This of course also requires that you understand what the critical points of the process are. Finally, you should mirror the training station as much as possible to the real line. Use the same tools and equipment, and try to make it as similar as possible.

As always, I hope these best practices I have seen at Toyota and Scania help you in your daily work. Now go out and organize your industry!

P. S. Many thanks to the kind people of Scania for their excellent tour of their training facilities! The photos are published with their kind permission. Also many thanks to Toyota for providing tours of their plants.