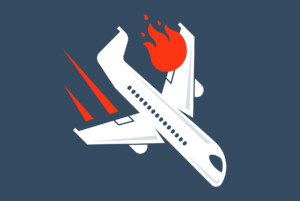 Boeing is a well-known maker of large commercial aircraft. If you fly occasionally, you almost certainly have been on one of their planes. Lately, however, Boeing is better known for quality issues and crashed planes. It seems that management at Boeing skimped on quality to save cost and make deadlines. In this post I want to look closer at the management of Boeing, especially in relation to the safety of the Boeing 737 MAX 8. Besides using different news sources, this article is mostly based on the book Flying Blind by Peter Robinson (source below). 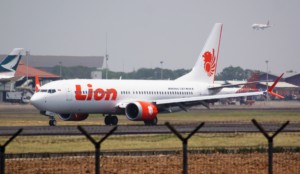 In 2018 and 2019, two rather new Boeing planes (both shown here) of the type 737 MAX 8 crashed under very similar circumstances. Lion Air flight 610 crashed on October 29, 2018, near Jakarta shortly after take-off. Ethiopian Airlines Flight 302 crashed on March 10, 2019, in Ethiopia. Both planes reported some sort of control problem before the planes took a nose dive straight into the ground. All 346 people died; there were no survivors. Other pilots also reported similar problems with the MAX 8 planes. 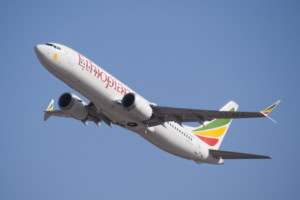 As a result, many aviation authorities grounded this type of aircraft shortly after the Ethiopian crash, until the cause of the accident was better understood (with the US Federal Aviation Administration  FAA noticeably lagging behind). Other pilots reported near misses due to similar problems with the same model of aircraft.

By March 18, 2019, all 387 Boeing 737 MAX 8 planes in 59 airlines were grounded, plus another 400 or so newly manufactured ones were awaiting delivery. Only after twenty months, at the end of 2020, did the first aircraft of this type start to fly again.

A Bit of Boeing Company History

Boeing had an excellent reputation with regard to safety. There was a saying “If it ain’t Boeing, I ain’t going.” The company was run by engineers, and safety was a high priority. The entire Boeing culture revolved around building excellent planes. Quality and safety issues reported upward were taken very seriously, and managers spent a lot of time on the production floor.

And with that, the entire culture of Boeing changed. There are reports of people being pressured NOT to report quality and safety issues. It seems people who did got fired. Making the deadline and saving cost had the highest priority. Safety was not even mentioned in the annual proxy statements between 2010 and 2014. In 2010 Airbus launched the A320 NEO family of planes, which was a direct competitor to the Boeing 737. Boeing managers were under pressure to design a new plane to compete with Airbus. Designing a completely new plane would have been quite expensive, and may have required re-licensing of the pilots, hence Boeing decided to update the 737.

A Bit of Boeing 737 Design History

The first version of the Boeing 737, the Boeing 737-100, had its maiden flight in 1967, fifty-five years ago. Since then, many upgraded versions of the plane have been developed, with the current fourth generation being the 737 MAX series, including the MAX 8. Over time, fuel efficiency became more important to the airlines. Newer, more fuel efficient engines are often larger than older engines. But this was a problem for the Boeing 737.

While the original turbines of the 737-100 were almost completely under the wing, the increasingly larger engines of the successor models no longer had enough space under the wings. To fit these larger and more fuel-efficient engines, Boeing moved them forward and up. Below is a drawing of the second generation 737-400 and the latest generation 737 MAX 8, with the engine highlighted in color. You can clearly see how the engine became larger and moved forward and upward. To save space, the MAX 8 engine is also somewhat flatter at the bottom when seen from the front. The engines of the third generation were somewhere in between the second and fourth generation shown here.

Some people had already commented that the fifty-five-year-old airframe had reached the end of its life, and a new design would have been better. The increasingly forward and upward position of the engine increased the risk of an unintended upward pitch in certain conditions (i.e., the plane starts to climb). To prevent this, a Maneuvering Characteristics Augmentation System (MCAS) software was added for the Boeing 737 MAX 8. This software detects if the plane has an unintentional climb, and would counteract this by steering the plane back downward.

For some reason (Cost? Deadlines?), Boeing decided that the MCAS system would use data only from ONE angle of attack sensor. And this is a big NO-NO in aviation. Planes are built around redundancy. The failure of a single device must not cause problems, and redundancy is required to keep the plane airborne and safe. The MAX 8 did not have this redundancy, and a failure of this single angle of attack sensor would throw off the entire MCAS system. And this is what happened. The angle of attack sensor malfunctioned, and the MCAS believed that the plane was in an unintentional climb, overrode the pilot decision, and steered the plane back down toward horizontal… except due to the malfunctioning sensor it was not horizontal but downward. A lot downward! Both planes flew straight into the ground despite the pilots’ best efforts.

Another part of the problem was that the Lion Air pilots did not know of the MCAS, nor did other pilots of the MAX 8. The handbook mentioned the MCAS, but only in the appendix, and only explaining the abbreviation. The pilots were never trained on the MCAS and – crucially – how to turn it off. When designing the plane, Boeing promised that pilots would not need any additional training for the MAX 8 if they were certified for the predecessor model. Yet, adding a new software module would require additional training, especially if the module (like the MCAS) could override the pilots’ decision in controlling the plane. Hence, the MCAS was kept under wraps and the pilots did not know about the system. This shocked a lot of pilots when it came out, and further undermined trust in Boeing.

After the first crash, pilots learned about the system, and the Ethiopian Airlines pilots actually were able to turn it off. Unfortunately, they needed to turn it off within the first 10 seconds of it malfunctioning, which would be extremely fast and nearly impossible to do if the pilot first had to identify the problem and figure out what to do. By the time the Ethiopian Airlines pilots turned it off, they were already in an unrecoverable dive.

As with most accidents, they could have been prevented. But the fault, in my opinion, does not lie with the pilots, but with the design, which in turn seems to be caused by neglecting safety in favor of profit and meeting deadlines. As one person said, “Boeing got away with murder.”

The Role of the Federal Aviation Administration (FAA) 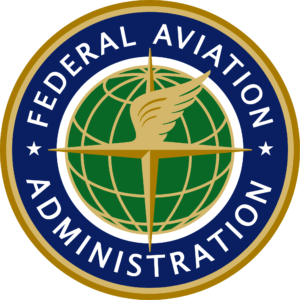 The FAA would be the oversight body to prevent makes of aircraft and other aviation companies from prioritizing profit over safety. Unfortunately, there was a lot of pressure on the FAA to make the plane happen and to look the other way. In fact, the FAA rewarded its employees if they made an airline more profitable, and they publicly shamed inspectors that caused trouble for the airlines. An FAA boss even told his people that their bonus depended on Boeing making its deadlines. Boeing was deep inside the FAA. The FAA was a “tombstone agency,” acting only if someone died. Anyhow, it seems that after two crashes, the FAA is tightening its certification process.

Is This an Isolated Incident?

It does not seem so. Certainly, these two crashes were the most dramatic accidents. But another plane, the Boeing 787 Dreamliner (maiden flight 2009), also made headlines with lithium-ion batteries catching fire. The problem is supposedly fixed, and no plane crashed. There were also reports on quality problems in building planes, from metal chips around wires to forgotten tools inside of planes. The latest model, the MAX 10 (a longer version of the MAX 8), is also rushed. Of particular concern is the end of 2022, after which new cockpit safety features are required by the FAA for aircraft models. It seems the MAX 10 may miss this deadline, and may require a different cockpit… which in turn would require more pilot training and increase cost even more. At the time of this writing, Boeing lobbyists are working hard to get another extension beyond the FAA deadline.

So, there seem to be lots of management shenanigans impacting the quality of the products at Boeing. Would I still fly in a Boeing? Yes, since air travel is still one of the safest forms of travel, even on a Boeing. However, if I have the option, I would prefer an Airbus. One side note, it seems that due to the power of unions in Europe, employees can speak much more openly and raise safety issues easier at Airbus than at Boeing. Anyway, this blog post turned out to be much longer than I planned, but I hope it was interesting to you. Now, go out, travel safely, and organize your industry!

PS: The day before I published this article, another Boeing 737 crashed. China Eastern Airlines Flight 5735 plunged almost straight into the ground. There were no survivors, all 132 people on board died. This was a Boeing 737-800, from the previous generation of 737’s before the Max8, and it did not have a MCAS system. The cause of the crash is still unknown, could be anything from a suicidal pilot to maintenance issues. Investigations are ongoing. The airline grounded its fleet of 737-800’s for now.

Besides many articles in different newspapers, I especially recommend two sources, a book and a movie. The book provides an especially good look at the behavior of Boeing management.

12 thoughts on “How Managers Drove Boeing into the Ground…”