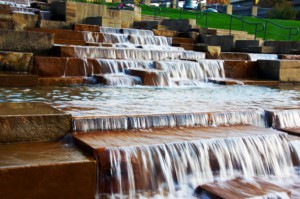 Chaku Chaku is a way to operate a semi-automated manufacturing line. One (or more) workers walk around the line, add parts to the processes, and then start the process. While the process works on the part automatically, the worker adds the next part to the next process, and so on.

The word “Chaku Chaku” comes from Japanese. It can mean either “Load, Load” (着々), or it can simply be the sound the machine makes while unloading (ちゃくちゃく), similar to “Clack-Clack.”

The basic principle of the Chaku Chaku line is very simple. The worker moves around the line from process to process and only loads the parts into the machine. After loading the part, the worker starts the machine and moves to the next process. At the end of the line, the worker starts again from the beginning.

Yet, as always, there is a bit more detail.

The system has to be a flow line. Chaku Chaku does not really work with a job shop. The processes themselves are semi-automated, and the machines can operate on their own once a part is inserted.

Usually, the loading of the machine at the beginning is manual. The ejection of the part after the process is completed is automatic.

This is due to the cost of automation. It is usually a bit complicated  to bring a part from the buffer into a well-defined position in the machine. On the other hand, it is much easier to simply eject the part from the machine into a much less well-defined position in the next buffer. Hence, the Chaku Chaku line has much less complexity than a fully automatic line that includes automatic transport of the material.

This automatic ejection is actually so common that a Japanese term made it into the lean vocabulary: Hanedashi (はね出し, to jump; to leap; to spring up) means automatic unloading of machines.

Automatic ejection has another advantage. If the worker carries the part to the next station, he can put it in the (empty) station right away. If he has to unload the part first, then it is either a two hand operation or he has to put the first part down. In any case it is more cumbersome.

Similarly, there may be even processes that are completely manual, where loading, processing, and unloading is done by hand. Again, strictly speaking, this would no longer be Chaku Chaku, but if a few processes of the line are manual it would not be too much of a problem either.

The processes may start automatically when closing an safety cage or when a light curtain no longer detects a hand in the machine. In these cases the machine has to be robust enough that starting with a missing or not yet completely placed part does not harm the worker, the product, or the machine. More commonly, the worker may start the process manually. Especially with manual starting of the processes I have sometimes seen the use of a switch designed for swiping rather than pressing to allow faster actuation.

This also has its own Japanese word, Nagara switch (ながらスイッチ, flexible rod switch), although I am a fan of using plain English rather than fancy words in a foreign language. I have seen both stiff and flexible switches. This may shave a few more seconds off the workload and increase efficiency, requiring only a little investment.

The number of workers in a Chaku Chaku line can be flexible. Naturally it has to be at least one, and fewer than the number of processes.

Another possibility is the baton-touch approach, where each worker is responsible for a section of the line, and hands over the work to the next worker. This is probably the most common way to manage the work distribution.

Finally, there is the option of a rabbit chase, where all workers do the same loop behind each other.

A fully staffed line where every process would have its own worker is no longer a Chaku Chaku line, and a large part of the benefit of automatic processing is lost. 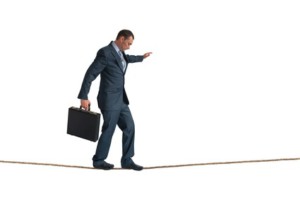 As for the number of people, this depends on the workload. In fact, the line balancing is a bit trickier. The total workload for humans is the combination of all loading machines and starting the machines, plus walking time (plus unloading and manual operations if present). The automatic processing does not count.

The work content for one person is then roughly the total work divided by the number of people (although not exactly, because the workload may not be evenly divisible). However, the work content of one human cannot be faster than the slowest process. If the human work is faster than the slowest process, then the human would have to wait for the process to complete. Hence, we cannot put too many workers in the system.

I have seen Chaku Chaku systems with one, two, and three workers. I can imagine systems with more, especially if the line is longer. But avoid over-stuffing the number of workers in a Chaku Chaku line, or the efficiency will decrease. 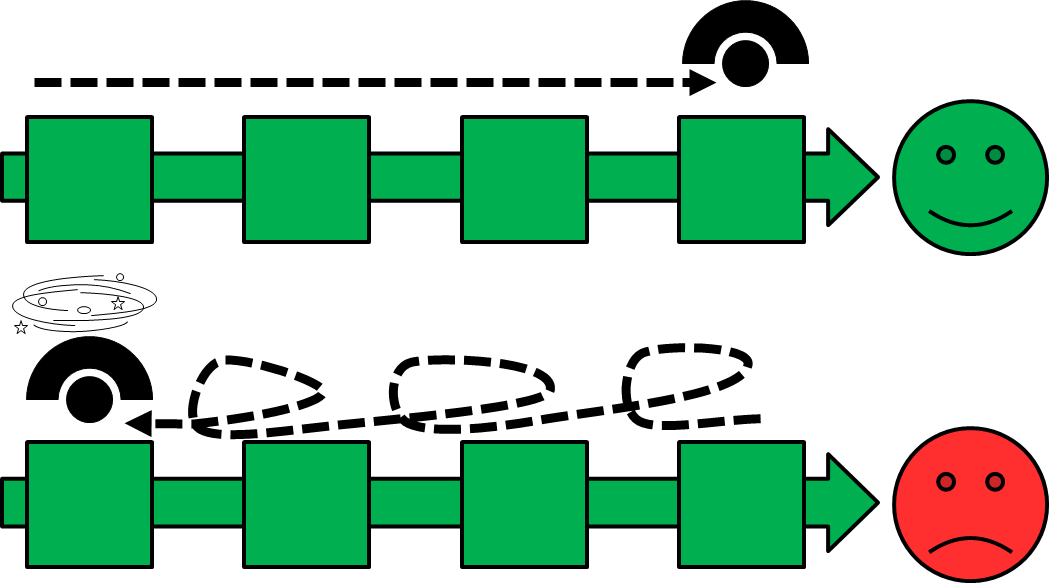 It gets even worse if the line involves manual unloading, as the worker would constantly have to walk back and forth between processes. Overall: Have the worker work in the direction of the material flow!

A Chaku Chaku line usually does not need buffer inventories, except between the different workers in the case of a baton-touch system above. Especially for manual unloading, a buffer is actually detrimental. If you unload the part, it would be easiest to load it right away in the next machine, rather than placing it in an inventory and picking up another part from the same inventory.

The advantage of the Chaku Chaku line is that it is often a good compromise between automation (processing and ejection) and manual work (loading and starting process). This may increase the overall productivity, although it does involve quite a bit of walking, which by itself is a waste again. An U-shaped line or cell is preferred, or any type of line where the end is close to the beginning.

On the other hand, the worker needs to know all steps of the process for working in the Chaku Chaku line (unless you use the baton-touch approach). This may make training a bit more difficult, although the work is usually not very challenging. (In Germany, unions often don’t like Chaku Chaku due to the use of unskilled labor).

Sometimes there is also a second complaint: that the work is monotonous and boring. Make sure the workers in the Chaku Chaku line get some job rotation and can work on something different for a change.

On the positive side again, Chaku Chaku lines often need little or no inventory between the processes, and are a version of one-piece flow. Besides reducing inventory, this also improves the lead time.

A Chaku Chaku line with one worker:

Chaku Chaku line with multiple people (shown until about 0:33, afterward other processes and material transport).

Overall, I hope this information was helpful for you, as this is a popular topic in lean manufacturing (although in my view it feels like there is still more writing about than implementation of Chaku Chaku). In any case, go out and organize your industry!

10 thoughts on “The Chaku Chaku Line”