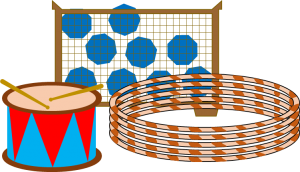 Eliyahu Goldratt developed different methods on how to manage production systems. These methods are nowadays known as the Theory of Constraints, or TOC for short. One key method described is called Drum-Buffer-Rope, or DBM for short. Similar to Kanban or CONWIP, it aims to constrain the work in progress (WIP) in the system. There is much discussion on which method is better than the other, although the result often depends heavily on with which method the respective author earns its living.  In this post I will present how Drum-Buffer-Rope works, and discuss its advantages and shortcomings.

Where the method came from

Drum-Buffer-Rope originated with the famous book by Goldratt “The Goal“, although it got its name only later in “The Race“.  In “The Goal” Goldratt combines management science and romance novel. As a romance novel, the story is mediocre. As a science book, it is a nice collection of general wisdoms and good suggestions. In combination it was a bestseller, since it is one of the few management science books that almost everybody can understand. (However, in my opinion a much better production-management – novel – cross-over is The Gold Mine: A Novel of Lean Turnaround by Freddy and Michael Balle)

The Boy Scout Example in The Goal

A very illustrative example was how the protagonist of the book manages a boy scout outing, especially how to keep the group together while different boys walked at different speeds. The solution was to put the slowest boy scout Herbie at the front, and prohibiting all others from overtaking him. Additionally, he lightens Herbie’s backpack so that he can walk faster.

Taking these boy scouts as an analogy for a factory created the Drum-Buffer-Rope method. The drum is the bottleneck, defining the overall speed of the system. The system cannot go faster than the drum.Pretty much all sources on Drum-Buffer-Rope agree on that.

As for the buffer and the rope … well … that is where it gets a bit fuzzy.

Many sources take the example of the boy scout literally. The drum is the slowest person. The rope extends to the first person in the line, which cannot walk faster than the drum. The buffer is the free space between the drum/bottleneck and the next person in front of him, allowing him to walk even if the next person is temporarily slowing down (for example to tie his shoe laces)

This may work for people, but it needs a fair bit of imagination to extend this version of Drum-Buffer-Rope  to manufacturing systems. You have to remember that the people in this example are the processes, not the parts. The parts are actually the ground covered. In the image above the people walk from left to right, but the ground covered (the parts processes) would move from right to left. Hence, it looks more like the image below.

Therefore, let’s take this example and put it in a proper manufacturing setting.

In manufacturing, the drum is still the bottleneck. The buffer is the material upstream of the bottleneck and has to make sure that the drum is never starved. The rope is a signal or information from the buffer to the beginning of the line. If the drum processes parts, the buffer moves forward. The rope is a signal when material is taken out, and gives an information to replenish another part at the beginning of the line as shown in the Illustration below.

Signal when material is taken out … information to replenish … I have heard something very similar before … Kanban! Yes, Drum-Buffer-Rope is similar to Kanban with the supermarket before the bottleneck. Whenever a part is taken out of the buffer/supermarket, a signal is sent via the rope/kanban to the beginning of the line/kanban loop to replenish material. A Drum-Buffer-Rope system as shown above is very similar to a kanban loop as shown below.

However, there are some differences which I would like to go into some detail below. But before that first for completeness sake another variant of Drum-Buffer-Rope, the Simplified Drum-Buffer-Rope:

Simplified Drum-Buffer-Rope is very similar to Drum-Buffer-Rope. The key to simplifying the approach is the assumption that the market or the customer is the largest bottleneck. I.e. in average your system always has enough capacity to satisfy demand. The rope then spans the entire length of the system.

Drum-Buffer-Rope has some underlying good ideas.

Prevents Overloading of the System

Most importantly, it does try to constrain the work-in-progress and aims to prevent an overloading of the system. As such it can be considered sort of a pull system like Kanban or CONWIP, and hence Drum-Buffer-Rope is superior to the traditional push systems.

Furthermore, the WIP in Drum-Buffer-Rope fluctuates less than with Kanban. A Kanban system defines the number of Kanban, which consists of the WIP, the supermarket stock, and the kanban without parts. Drum-Buffer-Rope (like CONWIP) is more precise as it limits only the physical parts (WIP and Stock), but dose not include the variation through fluctuation of kanban without parts.

Measuring Workload in the System as Time

Another good thing about Drum-Buffer-Rope is that it measures the work in the system not in pieces, but in time. Depending on how many hours worth of work are in the system the rope may release another part in the system.

In comparison, a Kanban system usually only counts pieces. In my view, counting pieces is fine if the pieces are similar, as in mass production. Measuring the workload in time may be beneficial if the items to produce have vastly different work content, as for example in a job shop. However, measuring time is also more difficult, as you need to determine the time for each product rather than merely counting them. In any case, a Kanban system can be adapted to measure time if needed, resulting in the same complexity as a Drum-Buffer-Rope system.

In my view, however, Drum-Buffer-Rope does have quite some shortcomings. For my daily work I therefore much prefer a Kanban system.

No Consideration for Shifting Bottlenecks

Goldratt claimed that in his experience this was not a problem in practice. However, Goldratt claimed many things if it benefited him. For example he claimed that his software MARS was able to find the optimal solution, until a judge ordered him to stop (He then rolled out hsi next software package with the most unfortunate name DISASTER).

In my experience, shifting bottlenecks are not the exception but the norm in most manufacturing systems, and simply assuming a fixed bottleneck will lead to problems. This problem may be confounded that his Theory of Constraints does not offer any good approach to find the bottleneck (see also my methods Bottleneck Walk and Active Period). Of course, increasing buffer sizes will lead to less shifting, but increasing buffers has a lot of disadvantages by itself.

Drum-Buffer-Rope considers only Starving of the Bottleneck, not Blocking

Drum-Buffer-Rope explicitly places a  buffer in front of the drum to prevent starving. I.e. the buffer prevents the drum from running out of material. However, it completely omits the possibility of the drum being blocked by a downstream process, which may equally lead to bottleneck downtime. While the buffer after the bottleneck is usually near empty, it is necessary to provide the space in case a downstream process acts up and blocks the bottleneck.

To be fair, some sources of Drum-Buffer-Rope have recognized this problem and introduced a space buffer after the drum, although many other sources still omit this.

Only the Upstream Inventory matters in Drum-Buffer-Rope

Drum-Buffer-Rope controls not only the buffer in front of the drum, but the entire inventory upstream of the bottleneck. However, little or no consideration is given for the downstream inventory, not only the buffer immediately afterwards, but the entire value chain to the customer. Hence, the inventory is not limited and under the right circumstances can still lead to overproduction. Combined with shifting bottlenecks it is almost certain that the downstream inventory will at least temporarily spiral out of control.

Which Part to Produce next?

A Kanban pull system not only constrains the total inventory, but also helps deciding which part to produce next. In the simples case it is merely the next Kanban waiting in line that is produced. Hence at least for high-runners it is clear what to produce next. Drum-Buffer-Rope does not really offer much guidance. If there are multiple product variants in the system, Drum-Buffer-Rope leaves more decisions to humans with all its flaws. For example the bullwhip effect may lead to overproduction of some parts while others are short in supply.

Limited Flexibility in Line Management With only One Loop

Drum-Buffer-Rope has only one major loop between the bottleneck and the first process. However, there are many good reasons why you may want to use more than one loop, as for example differences in cycle time, merging or splitting material flows, or system boundaries. For an entire list see my Ten Rules When to Use a FIFO, When a Supermarket.

Hence, with Kanban the system is better controlled and maintained, whereas with Drum-Buffer-Rope some parts of the system may escape notice, while the other part is thrown together simply based on the (presumed) location of the bottleneck.

Just out of curiosity, i also checked how popular Drum-Buffer-Rope was over time. Below are the percentages of books that mention either Drum-Buffer-Rope or Eliyahu Goldratt over time. It seems both terms started around 1980-1985, peaked around 2000-2005, and are since in decline. In comparison, the term Kanban is about 80 times as popular as Drum-Buffer-Rope, and with no significant decline.

Overall, i find a Kanban system (or alternatively a CONWIP system) much preferable to a Drum-Buffer-Rope approach. Both approaches have its merit, but I find Kanban much easier to use and less troublesome than Drum-Buffer-Rope. Another problem I faced when researching Drum-Buffer-Rope was that it was sometimes explained differently

The academic community seems to be split here in two camps. One side that reveres Goldratt and his methods, and the other side that tries to ignore him unless they criticize his ways. He did have a knack of making things easy to understand, but he was less skilled in giving credits to previous sources, while his methods often fall far short of his claims.

Overall, if you need to get on top of a manufacturing system that is out of control, a Kanban or CONWIP based pull system will probably give you faster and better results than Drum-Buffer-Rope. Now go out and Organize your Industry!