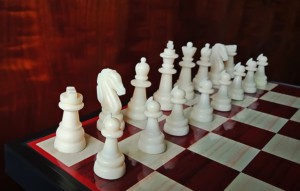 Hoshin Kanri can be used individually, but its full potential is shown across the levels of corporate hierarchy. The goals of a Hoshin Kanri should be derived from the Hoshin Kanri of the next-level hierarchy above. This post is part of a larger series on Hoshin Kanri. Let’s look at the hierarchy structure: 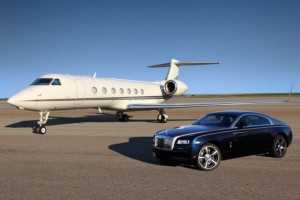 I find two things important here. First: We are talking long term! The items on the Hoshin Kanri this year should be similar to the items last year and will be similar to the items next year. A company does not move like a sports car and cannot zigzag across different directions. The larger the company, the more inertia to change there is. If the top level changes the goals and the direction every year, then a totally confusing message will be received at the bottom. “Left, right, drop everything and do this. No, cancel that. Do that instead. Hurry up and wait …” Depending on where you work this may sound familiar. The longer the CEO maintains the same direction, the more likely the company will actually move in that direction. Toyota has maintained the same direction for over half a century!

It is okay to have big goals, or even goals that seem impossible at the moment. They probably will not come true this year, or next year, but maybe it will happen in ten years or in thirty. For example, Elon Musk founded SpaceX in 2002 with the goal of reducing space transportation costs and enabling the colonization of Mars. It took them six years for their first liquid-propellant rocket to reach orbit. They are still years, if not decades, away from the colonization of Mars, but it is their ultimate goal.

Second, these goals should be process oriented, not necessarily a numeric target. Rather than setting a goal of “fewer than xx accidents per year,” foster a safety-conscious culture and enable an environment where safety is important. These process-oriented goals are often much better for defining the direction than a simple number (which may be fudged anyway).

Following the Hierarchy Down … 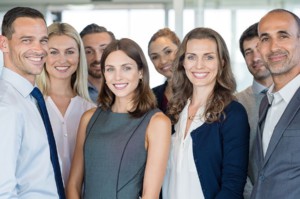 The next level in the hierarchy derives their goals from the level above. Of course, this is not a simple copying of the goals, but an adaptation of the goals of the boss to their own area of responsibility. The superior has to avoid too-detailed instructions, but rather let the subordinate think about it himself. Avoid micromanagement, no matter how tempting it may be. Having process-oriented goals help and allow the subordinate more freedom to do what he thinks is right to achieve the goals.

With each level down, these goals become more focused on the area of responsibility. Usually, most actual implementation happens at the bottom level of the hierarchy.

Review of the Hoshin Kanri

The most often forgotten part of PDCA is the actual Check and Act. Hence, the review of the Hoshin Kanri is crucial for its success. This review not only helps the subordinate, but also gives valuable input to the superior about the current state, which he eventually needs for the evaluation of his own Hoshin Kanri.  Here are some suggestions for the reviewer of the Hoshin Kanri.

The Hoshin should be reviewed at a minimum twice. The first review is when a new Hoshin is created. Here the reviewer should give input on the items on the list. Are they based on a process (good) or a target (not so good)? Do they reflect the needs and the Hoshin of the next level up (ideally the Hoshin of the reviewer)? The second review is when the period is up and the evaluation of the outcome begins (the Check and Act parts of PDCA). Toyota also uses a mid-term evaluation to check on the current progress, and managers may have additional reviews regularly to check on the progress. It is not a fire-and-forget approach.

As always, whenever possible have the review not in a meeting room but at the location where the events are happening (in lean-speak: Go to the Gemba!). Evaluating the outcome is much easier on site, and it will also be much easier for you to understand and to give input. 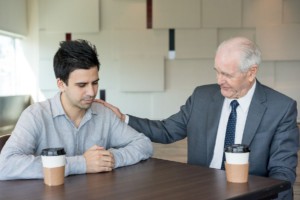 Second … and this may be difficult for some … be accepting of bad news! No matter how much you dislike it, failures will happen. In order to learn from these failures and improve the next attempt at fixing it, it is important to talk honestly about these failures. If you punish people for making mistakes, they will hide their mistakes. Your people and you can both learn a lot from mistakes. Actively encourage the reporting of mistakes. It is for a reason called trial and error and not trial and success. I could go on about this topic for hours, but: Do not blame your people for mistakes!

How Not to Do It 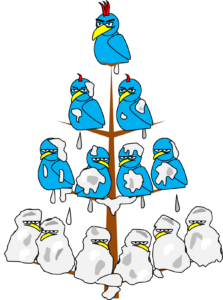 Deploying goals across hierarchy can be very helpful, but done incorrectly it can also drive a company insane. Giving inconsistent and frequently changing goals will mess up the process. Punishing people for bad news will encourage and reward liars. Company morale will suffer, and people will get stuck in a gridlock, doing more about appearance without having much time for actual improvement.

I have heard of one story where a consultant asked a forklift driver out of curiosity what his corporate targets were. Without skipping a beat, he said 5% EBIT (earning before interest and taxes). The consultant was a bit confused about this, and inquired how he will achieve this. The forklift driver said he had no idea, he doesn’t even know what EBIT means, but these are his targets. It turned out that these were also the targets of his supervisors, his supervisors’ supervisor, and so on, because the CEO wanted to have a 5% EBIT. Obviously it does not work that way! 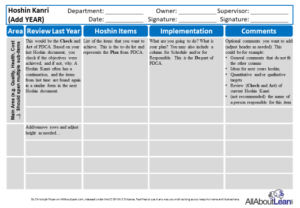 I have created a blank PowerPoint Hoshin Kanri Template for you to use. Hopefully it helps you. You can edit the PowerPoint to match the document to your needs.

Successful companies are successful not so much because of strategy creating, but rather strategy execution. Overall, Hoshin Kanri and its use across different levels of hierarchy can help you with deploying your strategy. However, while it is useful too, it can only help you focus on the important topics, but you still have to do them. Simply putting an item on the Hoshin Kanri will not magically fix it, but only prioritize the issue and subject it to a PDCA process. Now go out, deploy your strategies, and organize your industry!

P.S.: Many thanks to Isao Yoshino for his input!