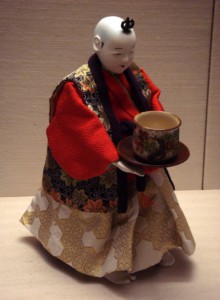 Recently I visited the Karakuri Kaizen Exhibition 2017 in Nagoya. This was a very impressive exhibit, and I learned a lot about karakuri from the many different examples shown there by over one hundred exhibitors. Organized annually by the Japan Institute of Plant Maintenance, it is to my knowledge the biggest showcase of karakuri in the world. This was an exciting visit that I will process in a whole series of blog posts on karakuri (Fundamentals and Examples)

Karakuri is the use of mechanic gadgetry rather than electric, pneumatic, or hydraulic devices. Definitely no computers! Within lean, it stands for mechanical gadgets that improve your system. Time to look closer at what I learned from this karakuri exhibition.

Karakuri is written in Japanese most commonly as からくり, but sometimes also as 絡繰り, 絡繰, 機巧, or 機関. It basically means gimmick, mechanism, machinery, trick, contrivance, or device. The key point here is some mechanical trickery.

It originated with mechanical dolls in Japan, called karakuri ningyo (からくり人形). These dolls are first mentioned around 1500 years ago, but were most popular around 200 years ago.

These dolls can be seen as the precursor to robots. One of the most well-known examples is the tea-carrying doll displayed at the top of the article. The weight of a bowl of tea put on the tray made the doll move forward a set distance while moving its feet (powered by a wound-up spring). After you remove the bowl and drink the tea, the empty bowl is placed on the tray again. This weight then made the doll turn around and move back to its original position.

Besides such tea-carrying dolls, there are also dolls that shoot arrows, write, or dance. They were used in theaters, as (expensive) toys, or on festival floats.

Yet, karakuri was also used in other contexts. The image here shows a foldable weapon called karakuri jitte. Houses with hidden floors and hidings places were called karakuri yashiki (からくり屋敷 for karakuri mansion). There was and still is karakuri furniture and umbrellas.

Of course in terms of lean, it is most famous for karakuri kaizen (if you are here, you hopefully know that kaizen stands for continuous improvement [ 改善]).

But before I go deeper into that, I would like to point out that while the term karakuri is Japanese, the idea itself is not unique to Japan. The Western world also has many such dolls that can play music, draw, or write.

Similarly, many towns in Europe have a mechanical puppet gadgetry, often in the tower of the town hall combined with a carillon. Heck, even Rube Goldberg machines (deliberately complex mechanical contraptions) would fall into this category.

Also, before electric motors and computers, similar mechanical gadgetry was also used in manufacturing to (mechanically) automate and improve the processes. Well-known examples are the Portsmouth block-shaping machines by Samuel Bentham that shaped ten wooden blocks unsupervised and stopped itself after completion, or the Jacquard loom where wooden boards “programmed” the pattern of the cloth in the mechanical loom.

What Is Karakuri Kaizen?

Karakuri Kaizen is a mechanical device that generally improves work. The device uses only mechanical gadgetry, and shuns electric, hydraulic, or pneumatic power. It is also not controlled by a computer but rather by the design of the mechanics.

At the Karakuri Kaizen Exhibition 2017 in Nagoya, I saw lots of neat examples. However, some of them included a bit of pneumatics or electric. While you should aim for a purely mechanical solution, there is no karakuri police, and at the end you have to use a solution that is best for you.

I would have loved to take pictures at the exhibit, but unfortunately there was a strict no-photos policy. I even had to put a sticker on my rear-facing camera lens on my mobile phone to enforce this policy. Of course, me being me, I had to point out that my phone also has a forward-facing camera (for selfies), and I had to ask if I needed a sticker for this lens too. Well, it seems nobody ever asked that question before! After lots of discussion, the staff concluded that apparently a selfie camera poses no danger to the intellectual copyright of their karakuri gadgets, and hence does not need a sticker 🙄 .

But fear not, I will show many of the ideas using diagrams and sketches, as well as photos and videos from other sources. Lets start with an example video from the Toyota Kaikan museum in Toyota City. It shows a little trolley that moves three items across a gap. Once three items are loaded, an (electrical) hook unhooks the trolley. The weight of the goods presses the platform downward. This gravity energy is converted into a forward movement through some gears below the cart. This will also wind up some springs inside of the cart. 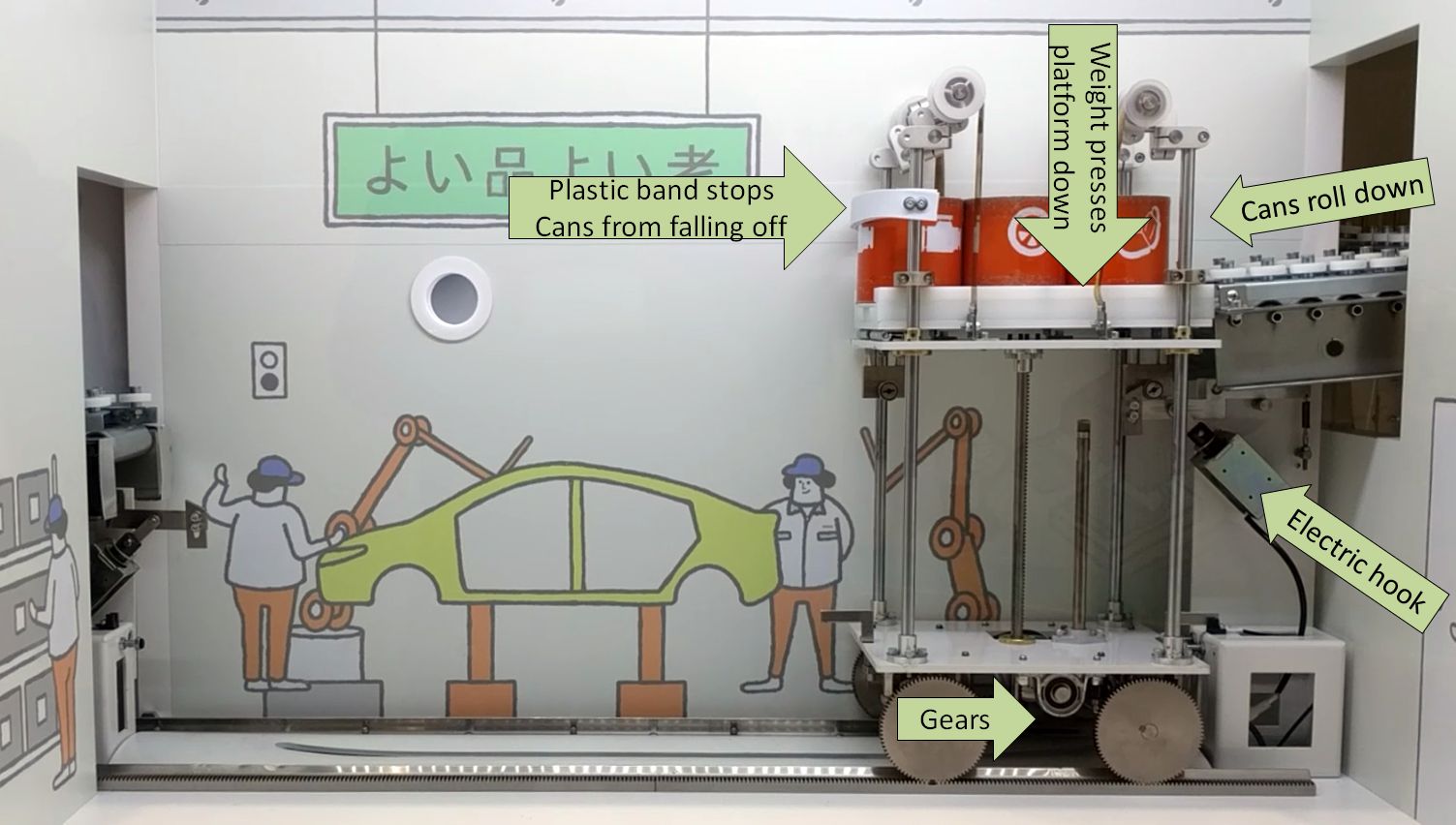 Toward the end of the outbound trip, the platform will touch a pin on the right side of the cart, which will tilt the platform, and the cans will roll off. An electrical hook secures the cart while this happens. Afterward, the electrical hook unhooks the cart and the springs will release the stored energy to return the cart back to its original position. 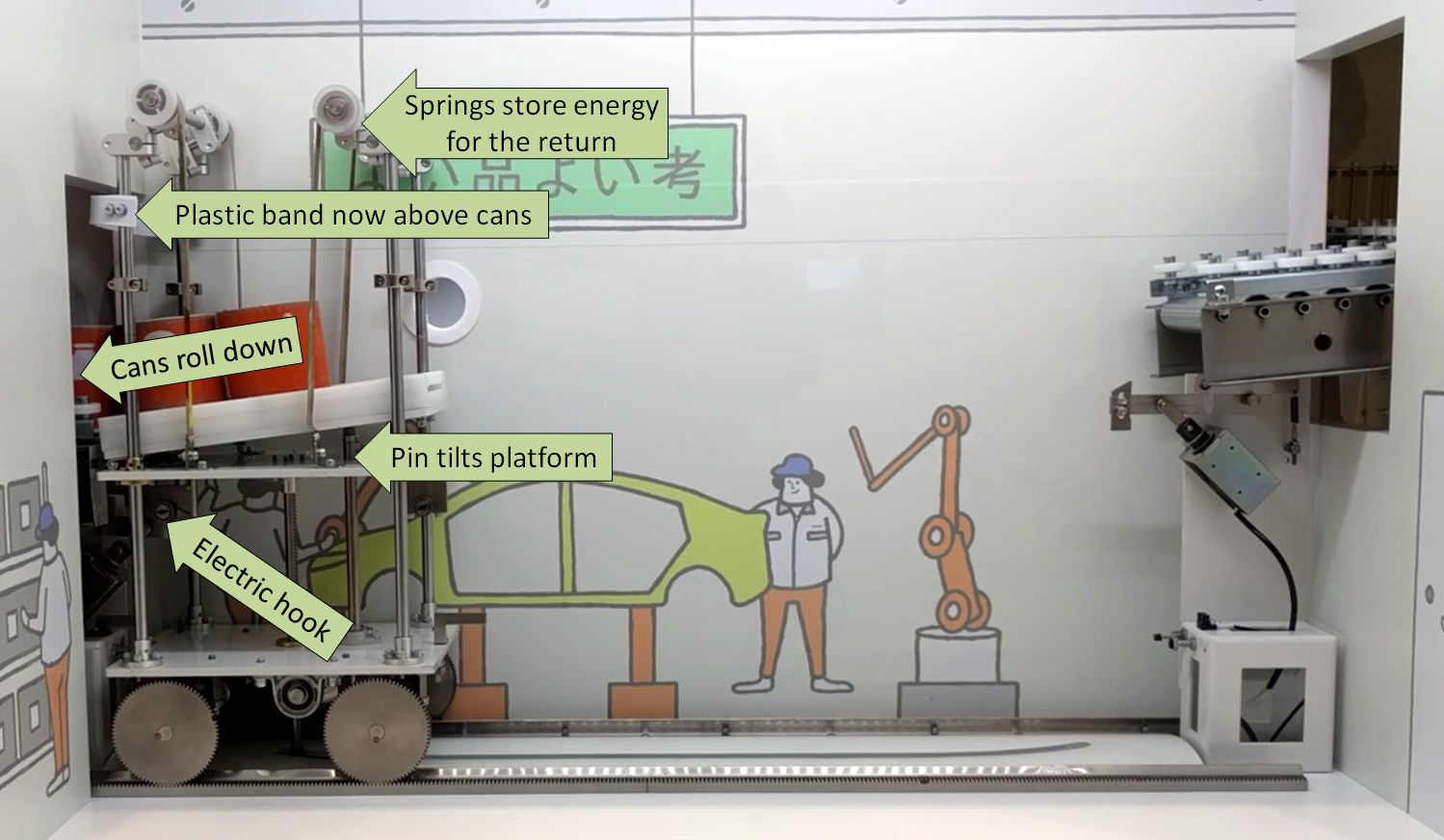 Here is the full video of the process.

Why Use Karakuri Instead of Computers?

Industry 4.0 is currently all the rage (maybe except on this blog here or there). Yet, karakuri kaizen with its focus on mechanical solutions is pretty much the opposite! These gadgets are not connected wirelessly, and not online as part of the internet of things or cyber physical systems. Heck, they don’t even have a microchip! So why use them? After all, any of these actions can also be done using sensors , actuators, and processors. Yet, karakuri is often better. In my view, there are a few advantages.

A mechanical system can be much cheaper than a computerized system. One example I know avoided a $10,000 conventional expense by installing a $500 mechanical gadget, or a cost reduction of 95 percent. While not all karakuris have such potential, they are often cheaper than the competition. 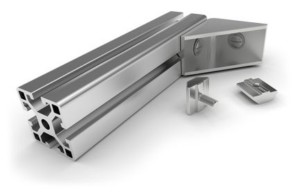 Many karakuris use aluminum profiles to construct the gadgets. If you’ve worked with aluminum profiles, you surely know that there are two price categories: very expensive and even more expensive!  Yet it is often cheaper than computers. Some ways around expensive profiles are slightly less expensive aluminum pipes. Other solutions I have seen simply welded much-cheaper steel profiles together – although this is hard to change afterward and recommended only after you built a prototype using aluminum profiles.

Often, maintenance of karakuri is also easier. If a computer system bugs out, it is really hard to figure out what went wrong. You need a mechanic, an electrician, and possibly also a programmer.

With a mechanical device, it is usually quite easy to see (even for the untrained eye) where the problem is. Hence, finding and fixing the problem is potentially much easier and may even be done by shop-floor personnel. However, no worker on  the shop floor will touch a computer system to fix it, because it is so much harder  to fix.

Much Easier to Improve 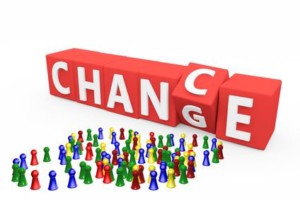 I kept the most important one for last. Karakuri is most often called karakuri kaizen. And kaizen is continuous improvement. Such improvement often requires trial and error, and usually requires the input from the workers.

Similar to the easier maintenance above, shop-floor workers can create and improve karakuri devices by themselves, whereas they will not install or change anything that includes computers and sensors.

Hence, karakuri devices allow for a grass-roots continuous improvement in lots of little steps. Computer systems are big steps, usually initiated by management when they notice the problem (often too late, and only the biggest ones), and implemented by engineers and programmers when they have the time (rarely). In sum: Kaizen is so much easier with karakuri!

Okay, so much for the introduction. In my next post I will go into some fundamentals. While I will not and cannot cover the vast topic of kinematics in one post, I would like to focus on the energy management of karakuri devices: Where does the power for its movement come from, where is it stored, and where does it go to. In my last post I will show you lots of examples for karakuri. Now, go out, generate some solid mechanical links instead of computer gizmo-stuff, and organize your industry!

Found a good Karakuri Video from Toyota. Many thanks to Cyril and to Michel Baudin for pointing that out to me.

12 thoughts on “Introduction to Karakuri Kaizen”