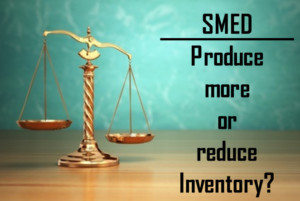 SMED (Single Minute Exchange of Die) is a very useful tool to reduce changeover time. Reducing changeover time will free up time for other uses. Western management often wants to use this time to produce more goods. However, the rule of thumb at Toyota is to use this newly available time to do more changeovers rather than more products. This increase in changeover has the potential to significantly reduce the lot size, which often has much larger benefits than the additional work time. In this blog post I want to look in more detail at this relation between changeover duration, productivity, and lot size.

SMED (Single Minute Exchange of Die) is a structured approach to reduce changeover time. The seven steps are:

I have written a series of posts on how to do SMED, its history, and some SMED exercises, hence I won’t go into more detail here.

SMED can reduce your changeover time. You can use this time either to free up time or to do more changeovers (or anything in between). To illustrate the effects, I use a simple system with few parts. For simplicity, all parts have an equal share of the production time, and all changeovers take the same time. Production and consumption are also constant. I also assumed we need no safety stock. This is, of course, not quite realistic, but it makes the picture easier to understand, while still allowing valid conclusions for real-world situations. 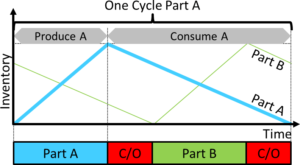 In the first example I have two parts, part A and part B. As shown in the graph, we start to produce A, do a changeover, then produce B and do another changeover. After the second changeover, we again produce part A and repeat the cycle. 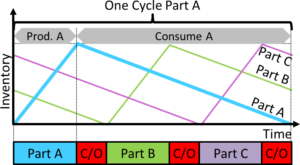 A similar picture can be drawn for three  parts. The production run of part A has to last until we produce more of part A again. This will be after three changeovers and the production runs of part B and part C. The behavior is again similar if you have four or more parts; you always have to cover the time until you produce part A again.

Half Changeover Time after SMED

Now assume we did a SMED workshop, and would have been able to reduce the changeover time by half. Now the changeover takes only half the time as it did before. This gives us two options. 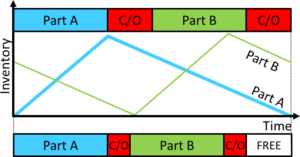 We could now use the time to produce more parts, or to send workers home, or to do maintenance, and so on. However, let’s also look at the option recommended by Toyota, to do more changeovers. 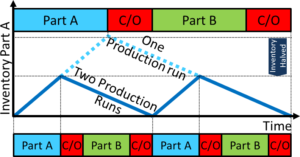 If we use more changeovers, we can do exactly twice as many changeovers as before since we reduced the changeover time by half. The picture again shows the initial situation on top, and the current situation with two production runs at the bottom. Each part is now produced twice during this period. For clarity I only show the inventory of product A over time.

The above examples looked at specific examples. Putting this on a more general basis, there are two main variables that can be varied: 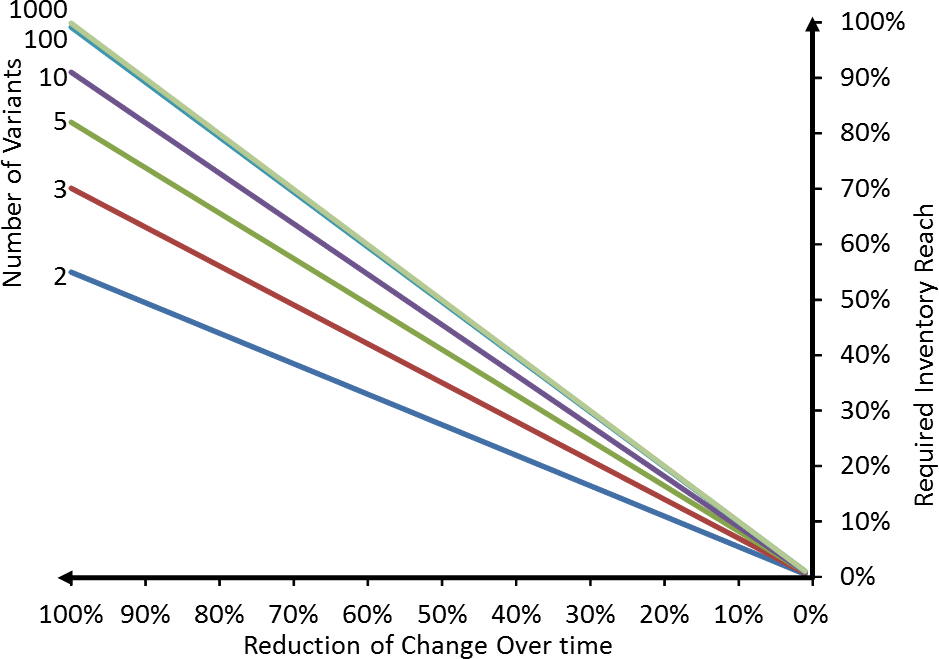 The graph is a bit more complex, so let me go through it in steps. Let’s start with the blue line for 2 parts. If you have not done anything to your changeover, then you would need an maximum inventory reach of 55% of the time.

I did this also with other percentages of total cycle time. The graphs below show the same data for 30%, 50%, and 70% changeover time, although these are unlikely to happen in industry (if you do 70% of the time changeovers, you have only 30% of the time left for production). These graphs also show a similar relation to the graph above.

Please note that you still need inventory for other purposes (e.g., to buffer other fluctuations, or as safety buffer). Yet a SMED workshop and the resulting reduction in changeover time can drastically reduce your inventory.

Of course, while it is generally recommended to put this gained time into more frequent changeovers, there are also cases where you may want to put it into more parts rather than more changeovers. For example, if your customer is screaming bloody murder because you lack the capacity to produce what he wants, then you better use the time to produce more rather than smaller lot sizes. You can also use a mixed approach and put part of the time toward producing more, and another part toward smaller lot sizes.

As always, there is no fixed rule, but it all depends on the situation you have on the shop floor. I hope this post was insightful to you. Now, go out, reduce your change over time, and organize your industry!

4 thoughts on “What to Do with SMED: Reduce Lot Size or Increase Work Time?”