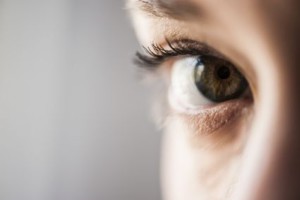 Yet another hot topic in lean manufacturing is visual management. This can be very helpful in running a shop floor, but when done wrong it can also be quite wasteful and embarrassing. In this post I would like to show you the basic principles of visual management with a few examples. There is more to visual management than merely putting lines on the shop floor. 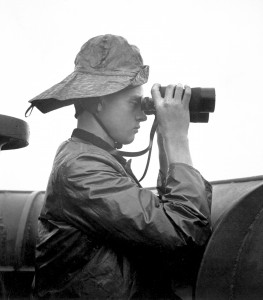 Visual management aims to make the situation easily understood merely by looking at it. The goal is to get as much information as possible with as little observation or time as possible. Visual management complements well with the idea of going to the real place (Genchi Genbutsu). It also intertwines closely with 5S.

In my view there are different directions you can go with visual management. I will discuss them here in order of preference, with the best one at the end.

Visual management can be done by putting data on display on the shop floor. It is usually my least-preferred way, but with some information it is difficult to do otherwise.

One common example is digital information displays, often called Andons (See also my post All About Andon and How to Use an Andon – and How Not To). On such information displays you can usually see the production rate, the quality defects, and the status of the machines. 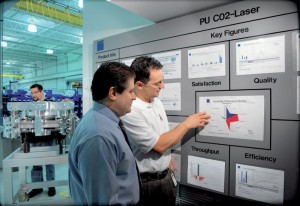 It is also possible to put data on paper. Often this is printed, although I prefer handwritten data due to the better involvement of the workers (see The Advantage of Handwritten Data on the Shop Floor). Ideally, this data is shown graphically and easy to understand, using graphs, tables, diagrams, and colors.

The idea is again that the data is right there on the shop floor. This is useful if there is no easier way to visualize the system. 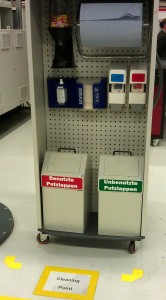 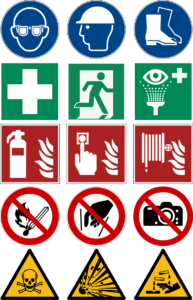 Another approach is to mark and label locations on the shop floor. Using different colors you can mark what goes where, and label the places so that the items and tools go to the correct places.

A lot of such markings are actually government regulated. For example, all fire- and emergency-related markings are examples of visual management.

Visual Management with Tools and Parts 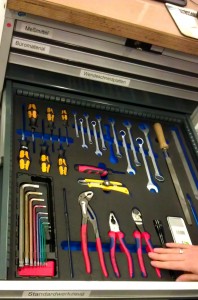 The best type of visual management is if the information about the system can be seen in the system directly. If you create a graph or a data display, there is a chance that it is outdated or simply wrong. Whereas if you see inventory on the shop floor or tools in a drawer directly, the  information is up-to-date, and less likely to be incorrect.

Common examples are tool drawers  where each tool has its own location. You can see immediately which tool goes where and which tool is missing.

A similar approach is a shadow board, where the shadow of each tool is outlined. The shadow board here was used at Alcatraz prison in San Francisco. At the end of the shift, the guards could see immediately if all knives were returned, or if an inmate was walking around with a potential weapon.

I have seen similar shadow boards for knives in the food industry. The managers there worry less about murders, but they don’t want any tool to go missing and potentially end up in the products.

This can also be done with material. A good FiFo lane not only manages inventory but also shows you where your material is, how much more work there is, and many other details on your process. 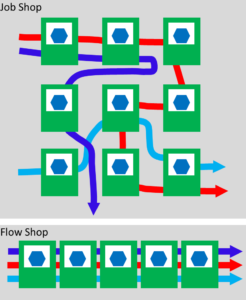 The image below is the shop floor at Trumpf, which I find particularly well organized and easy to understand. 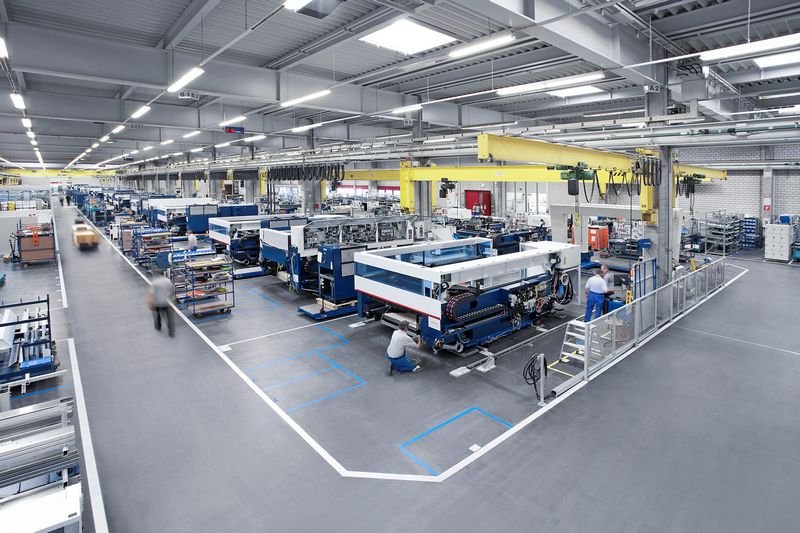 As a counterexample here is an old smithy. Even though it is a much smaller space, it is much more confusing. 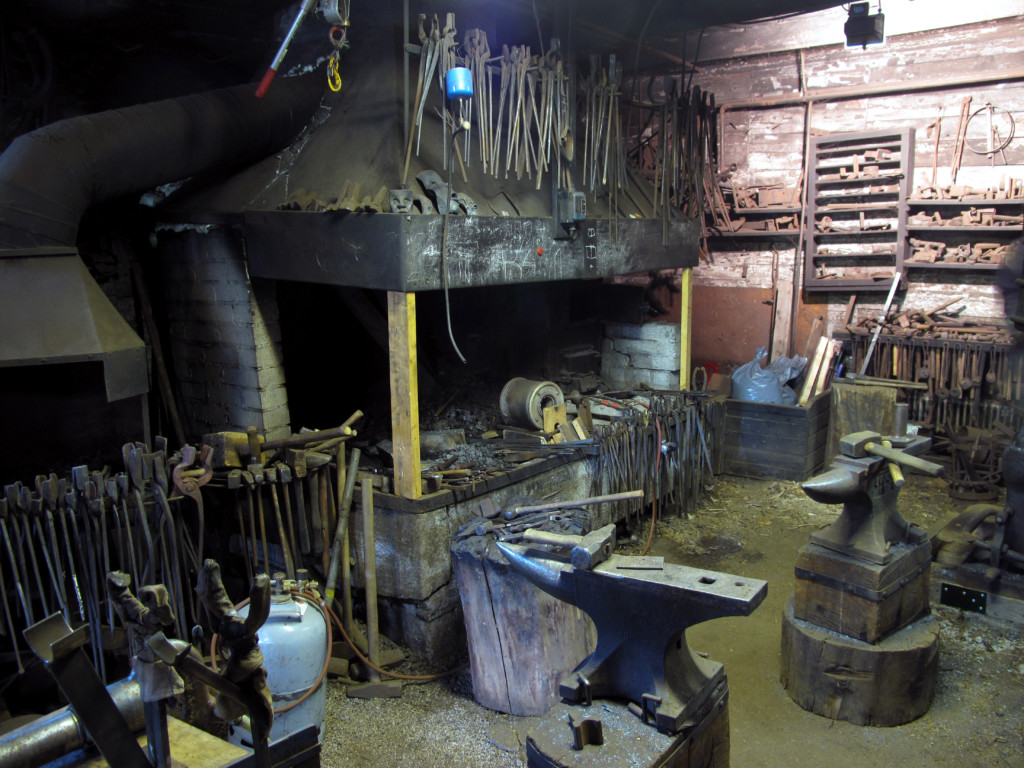 Of course, I have also seen flow shops that were built like a maze, and even the workers that worked there every day had difficulty understanding the material flow. Clarity and structure are not only nice to the pedantic German engineer (me), but actually do have benefits for understanding the system. 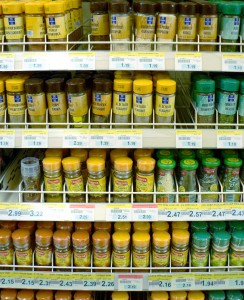 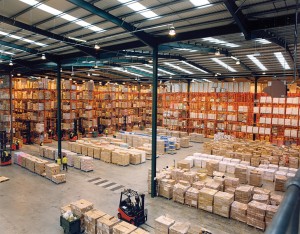 Similarly, it is possible to structure your inventories. A supermarket has a dedicated lane for every product. You know immediately how much you have of which material. You can even mark the supermarket with green and red to show when you may get into a critical low-stock situation. This is so much easier than having an unstructured warehouse.

Some Not So Good Examples!

Like everything, visual management can be done badly too. It is particularly easy to overdo it with the markings. The image on the left is staged, but similar examples can be found proudly advertised on the web.

This is overkill. There is no advantage in visual management for individual pens and scissors, especially if it is the personal desk (it may be useful if it is a shared workspace, but even then it may also be too much).

Also, for illustration here is the cabling of two different computer racks. See the difference? 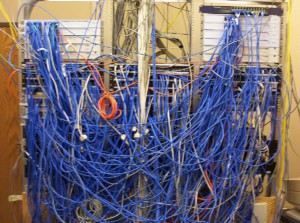 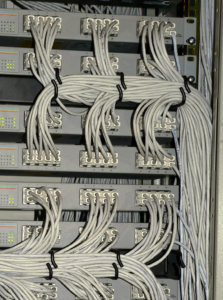 Examples Outside of Manufacturing

There are also examples in other industries. For example, during surgery, used sponges and gauze are stored in an array of plastic bags or hung on hooks so it can be easily seen how many were returned. The number of surgical sponges after the surgery has to be the same as before, otherwise the surgeon has to go looking for the missing sponge. After all, you don’t want the patient to wake up with something extra. 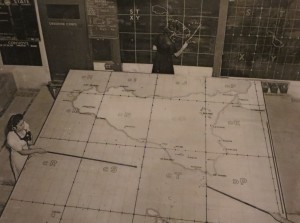 For a more positive historic example, see my blog post on Visual Management during World War II – A Visit to the Lascaris War Rooms in Malta. You can find a lot of visual management ideas there before the use of computers. Quite nifty, and open to the public if you happen to be in Malta 🙂 .

Again, the goal of visual management is to understand the situation as quickly as possible merely by looking at the shop floor (or, as a second choice, data displays on the shop floor). So go out, make your factory easier to understand, and organize your industry!

P.S.: This blog post is based on a question by Prashant.

17 thoughts on “How to See Visual Management”