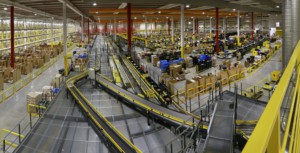 This is the third post on my series on the inner workings of the Amazon Fulfillment Center. In this post I start with the highly interesting process of the outbound value stream (i.e., how the goodies go from storage to your door). Since this is the core process, the next post will continue this outbound value stream.

The outbound value stream is the largest part of the work. It all starts with the picking process, where the desired goods are picked up in the picktowers. Modern fulfillment centers use robots to aid the picking process, while older centers and centers with goods that are difficult to handle (bottles, clothing, etc.) use manual picking.

Let’s start with manual picking. As you probably imagine, someone is walking along the shelves picking up stuff. They push a cart with yellow boxes and have a handheld scanner. The scanner tells them the shelf location for the next pick. Depending on the product, this may be anywhere from 30cm intervals as shown below, or with a new shelf area starting every 3 meters. Since this is a random storage system, the shelf area may include other products, and the same product may also be on other shelves. The picker scans the shelf barcode followed by the item. If everything is okay, the picker moves on to the next location. 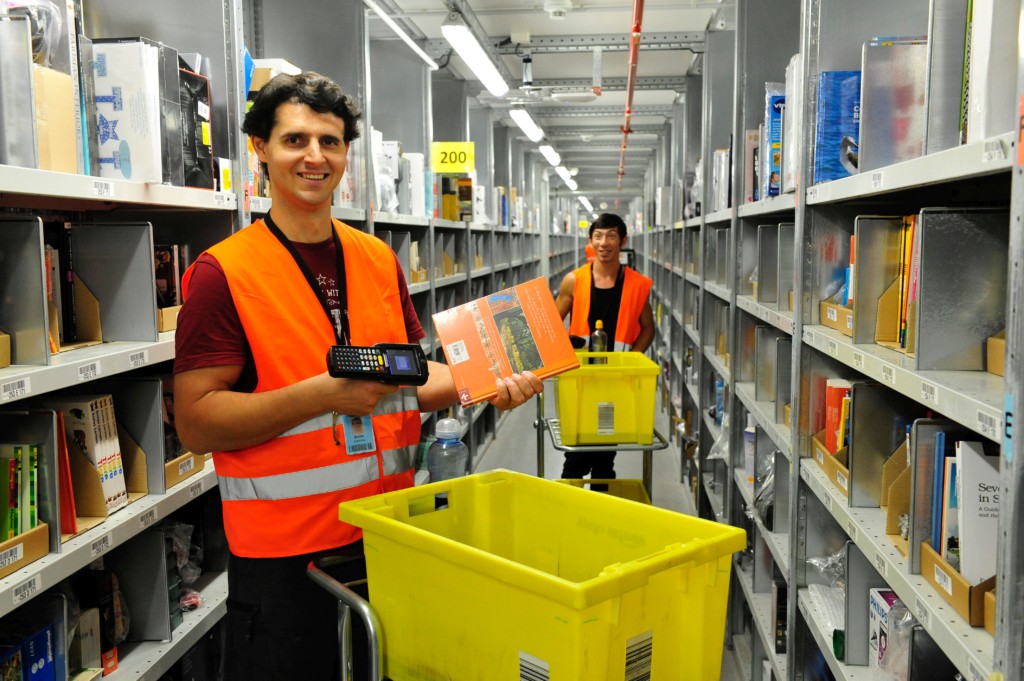 Pickers work on multiple orders at the same time. If a parcel has multiple items (a multi-pack), multiple pickers may work on the same parcel. Hence the boxes of the pickers usually contain items for more than one order.

If there is any problem (i.e., the item is not found on the shelf), the picker gets a new item from the scanner and nothing is picked. Even if the picker sees the item in an adjacent location, he must not take it. Specialized problem solvers will have a look at this shelf to figure out what went wrong. If there is a wrong item or damaged item, an un-scannable item, or stuff that is still part of a larger box, it goes into an “amnesty bin” to be sorted out later by problem solvers.

The items in higher demand are stored closer to the packing stations so that the pickers have to walk less. Oversized items, hazardous goods, and goods with different storage needs (e.g., clothes on a hanger) are stored in different areas with shelves or racks that suit the product. Heavier goods weighing more than 15kg are handled using vacuum lifts or with two people. They also try to have one picker handling only one area of the pick tower, to reduce time-consuming moves between floors (called zone-picking). 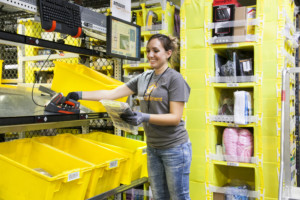 Similar to robotic stowing, the robotic picking does not use a robot to grab items off the shelf. This is currently still too unreliable and slow. However, Amazon works to also automate the picking, and is thinking about using more standardized packing to make the job easier for robots. But as for now, taking items off the shelf is still done by humans. The same small Kiva robots that carry the pods for the stowing also carry the pods for the picking process.

The worker at the picking station sees on a monitor the next item including a picture of the item, how many of it, and which slot in the yellow pod the item is. The worker simply grabs the item out of the pod, scans it, and puts it into one of multiple totes as determined by a computer. Similar to a pick-by-light, the placement is indicated by a light above the tote. The image above shows a hand scanner, but the SAT2 I visited had a scanner over every box. Hence similar to a supermarket checkout, the worker simply held the item under the scanner before dropping it into the tote. A future planned change is to include spotlights above the worker directed to the pod, showing which slot in the pod has the desired item. This may make the system even faster. Below is a short video for the picking from pods.

Similarly to the stowing, if anything is out of order, the worker is not instructed to fix it, but instead to give a signal to problem solvers who will sort it out. To help with this process, a camera takes a photo of the side of the pod that was picked after the picking. An artificial intelligence algorithm tries to find out if the photo is consistent with the expected pod content. If the algorithm senses a difference (a “delta”), it may be sent to a human problem solver. This is not a cross-checking of the picker, but only a quality-control process.

Every now and then, the yellow (or sometimes black) totes are pushed onto a conveyor belt for the next stations, which may be packing if there will be only one item in a box (single item), or another rearranging process for multi-packs having more than one product in an box. 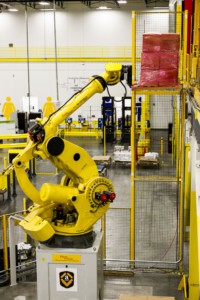 Sometimes an ordered product is only available in a fulfillment center farther away. In this case it is often too expensive to ship a small parcel directly to the customer over long distance. The cheaper option may be to ship a large box containing many such items from one center to another and pack it in a center closer to the customer. Such shipments between fulfillment centers are often done using large black boxes that are stacked on a pallet. This pallet is deconstructed in the target fulfillment center. The only robot used in FRA3 stacked such black boxes onto a pallet (and it is named “Chuckle Berry” 🙂 ). The robot in the image is a similar robot for handling pallets in the USA.

Between picking and packing, there may be additional stages possible. One of these is the multi-pack. If a customer gets only one item in a parcel, the yellow totes go directly to the packing stage. These are either small orders or Prime customers that get faster delivery with more parcels. In any case, if the customer gets more than one item per box, the picked items need to be rearranged. This is done in a separate station.

The yellow totes arrive from picking. Another worker at SAT2 takes items out of these totes, scans them, and puts them into a slot in an adjacent shelf as indicated by lights. Each of these slots is one parcel with multiple items. When one order is completed in a slot on the shelf, a light on the other side indicates for another worker to take these items out and put them into another box, a gray tray. This tray goes then to packing.

At FRA3 the system was slightly different, where the items were picked out of the tote into a slot of a shelf.  When the shelf is full, the entire shelf is then wheeled to a packing station. This example of the movable shelf below is from MAD4 in San Fernando de Henares, Spain. Since FRA3 also handles fashion items like clothing and shoes, it is more likely to have multi-packs, with an average of 2.18 items per parcel. People seem to order different sizes to see what fits, and return the rest. As a result, FRA3 also has a higher-than-average return of items, but 95% of it was suitable for resale. 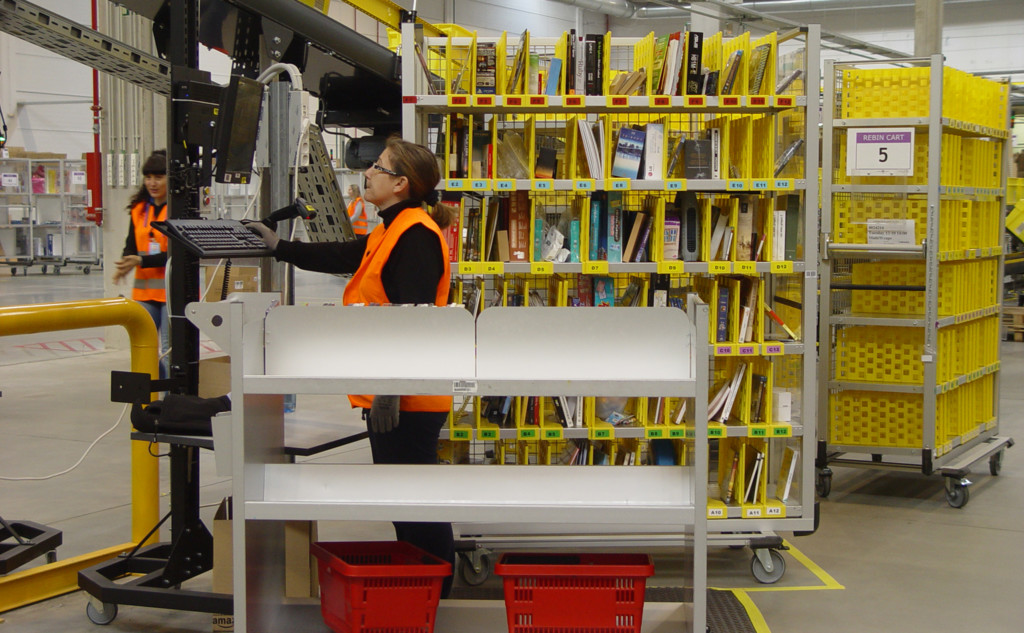 It seems in some fulfillment centers they make the totes from picking rather full, and then re-pick them a second time into red boxes for individual orders. This is shown below.

For many products the customer can select an optional gift wrap. The products then go to a gift-wrapping station. 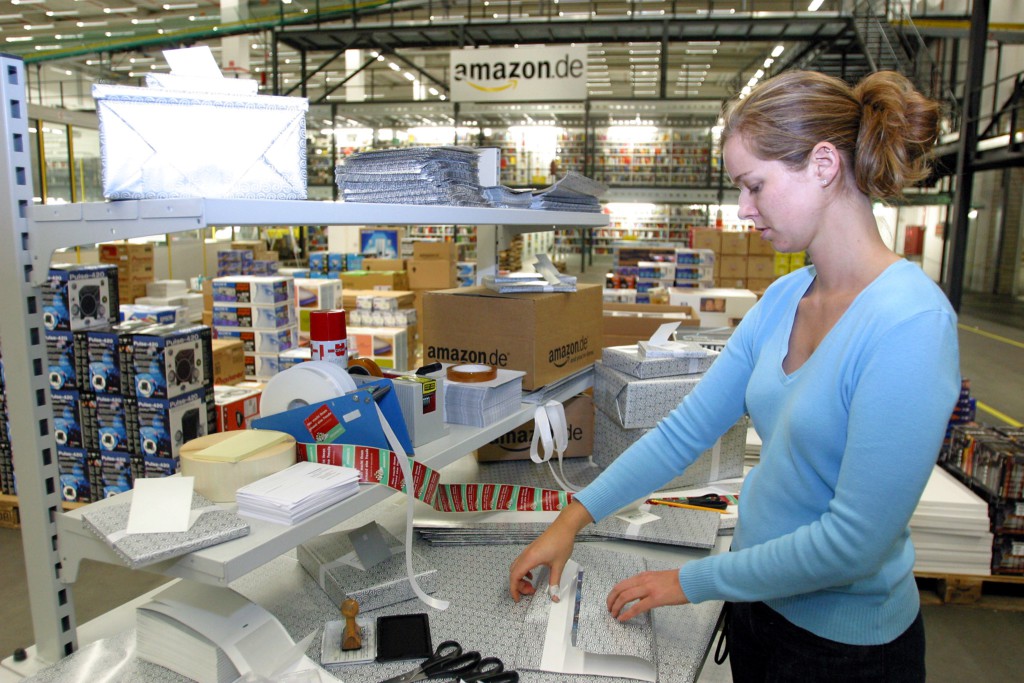 In the next post I will continue with the outbound process: pack, SLAM, and outbound. Until then stay tuned, look at your material flow, and organize your industry!