Recently I had the chance to visit two Amazon Fulfillment Centers to take an in-depth look at their inner workings. While many articles about Amazon go over the basics, I will give you a deep dive into the workings of their fulfillment centers. Due to the amount of information, I divided the content across a series of posts. In this first post I will go through their general layout as well as their Kiva robotics system. Please note that most of the images and all of the videos are courtesy of Amazon.

Amazon has over 175 fulfillment centers all over the world. The first center I visited was the modern SAT2 in San Marcos, Texas. The SAT2 stands for this being the second location close to the San Antonio Airport (SAT). This is a rather modern center established in 2016  using all the fancy Kiva robots (or “Amazon Robotics” as it is called now). It has an area of around 80,000 square meters, with around 2 million shelve slots containing 15-16 million individual goodies.

The second one was the FRA3 in Bad Hersfeld, Germany. FRA3 means it is the third location near Frankfurt Airport (FRA). Their numbering is currently up to FRA54. FRA3 is the largest fulfillment center of the 13 (and probably more soon) centers in Germany. It is also the only one that delivers apparel (clothing, shoes, etc.) from within Germany. Established in 2009, it is one of the oldest in Germany, with surprisingly little robotics (the oldest one is the nearby and much smaller FRA1). The entire warehouse contains only one robot for stacking larger boxes for cross-shipment to other warehouses. Quite a contrast to SAT2! It is also crazy that a ten-year-old warehouse is already old.

FRA3 and FRA1 handle what Amazon calls “sortable” items (i.e., items that can be sorted and packed easily). Other centers handle “non-sortable items” … think washing machines and pianos. There are also sortation centers where customer orders arrive in bulk and are repacked for individual customers. Receive centers receive large quantities of goods from suppliers and distribute them across the fulfillment center network. Delivery stations prepare orders for the last mile, although the majority of orders comes from fulfillment centers directly. Finally, “specialty” locations handle items that does not fit the above categories, and also provide support during peak seasons. 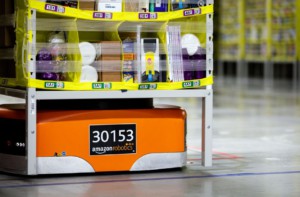 One of the most amazing aspects of Amazon fulfillment is their Amazon Robotics (formerly Kiva Systems) approach to moving material to the stowers and pickers. Hence, before going into more detail on the inner workings, I would like to look at this quite fancy robotic technology. It is estimated that the Kiva robots reduce the fulfillment cost by 40%.

For the more modern automated storage, Amazon uses Kiva robots (now Amazon Robotics). Amazon bought Kiva Systems in 2012. While Kiva had many different customers before, including The Gap, Walgreens, Staples, Office Depot, and more, Amazon did not renew these contracts, and Kivas are now exclusively used by Amazon. Currently around 26 of the 175 fulfillment centers around the world use Kivas, but both numbers are steadily increasing. Reportedly, with Kivas Amazon can store 50% more items than with manual pickers, and can get an item within around 15 minutes compared to 60-75 minutes for a manual worker.

A Kiva is a small orange robot about 30cm high and weighing around 130kg. It can lift storage shelves (called pods) of up to 750 pounds (340kg). These small Kiva robots carry these specialized shelves to the stowers and pickers for them to add or remove items to/from the pods. Across the US, Amazon has 120,000 KIVA robots. The image below is from MDT2 in Cecil County, Maryland, USA. However, it does not do justice to the enormous space filled with pods in a fulfillment center. I estimated a single floor in one tower has 10,000 bins, easily adding up to over 100,000 bins in a fulfillment center. I will talk more about this later in this series.

How They Organize Themselves

The picture below is a screenshot from an Amazon press video, showing you the pods of a single floor. You can see an amazing number of pods. Most fulfillment centers have multiple floors like this. You can also see that they keep “roads” empty for access, but that pods are also in larger blocks of 4×6 or similar. Hence not every pod can be accessed right away. 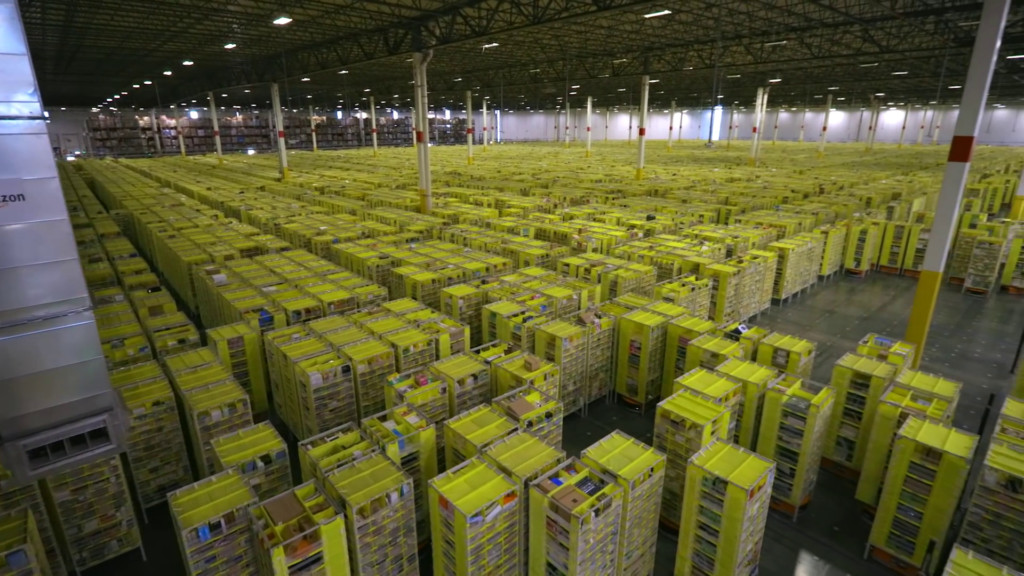 Kivas know their location primarily from 2D data codes that are attached to the floor at regular intervals. When a Kiva drives across, it scans for labels to know where it is. Additional sensors help to avoid collisions. Behind it is the Amazon Fulfillment Technologies (AFT) software, which I will also talk about in a later post.

The Kiva area and the worker area is clearly separated by a fence. If a maintenance worker has to enter the Kiva area, he wears a signaling device called a Robotic Tec Vest that makes all Kivas within 5 meters around him stop in their tracks to avoid a collision, injury, or damage to the goods.

Amazon is currently working on the next generation of Kiva robots, nicknamed “Hercules,” often abbreviated to H-Drive. The development started in 2015 with the goal to make them shorter (i.e., more space for goods above) and stronger. And, or course, smarter.

While the first generation of Kivas were about 30 cm tall, the next generation will be only around 20 cm. While the first generation could lift 750 pounds (340kg), the next generation can lift 1,250 pounds (566kg). Note that there are also heavy-duty Kivas for 3,000-pound pallets (1360kg). Being both smaller and stronger reduces the space needed to store and handle the inventory. This aligns with the goal of Amazon to open more warehouses closer to urban centers where the property prices are higher but where a  even faster delivery is possible.

The new design also has significantly less parts (Amazon claims 50% fewer components), making them both easier to maintain and cheaper. They are assembled at the Amazon Kiva headquarters in North Reading, Massachusetts, to be used all over the world.

Amazon is also experimenting with airborne delivery using fully electric drones. They are currently able to fly up to 15 miles carrying up to 5 pounds and deliver within 30 minutes. The drone is designed for vertical take off-and landing like a helicopter, but switches to horizontal flight like a plane while en route. Different sensors (hopefully) detect obstacles like chimneys and power lines.

However, you can’t expect your parcels to be dropped in your backyard by a drone (yet). There are still many problems to solve, including safety and regulatory airspace management issues for autonomous robotic out-of-sight flight. You will also notice that the video below is showing the drone on a wide open field.

In my next post in this series I will start with the layout and the inbound value stream. Until then, stay tuned, and go out and organize your industry!