This fourth post in the series on the inner workings of the Amazon Fulfillment Center will continue to look at the outbound material flow, including pack, SLAM, and the loading of the trucks. In the next and last posts, I will also look at the software behind it as well as some surrounding processes. 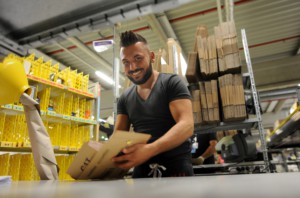 Finally, the item goes to the pack station. A fulfillment center has easily 100 pack stations or more, although not all of them are active all the time. During Christmas more stations are added temporarily.

At the pack station, the item is taken out of the yellow tote and scanned. A monitor displays which size carton or envelope to use. A dispenser provides packing tape in the right length. The employee builds the box and tapes the bottom, inserts the item, and tapes it closed. At the very end, a white barcode is added. This barcode links the parcel to all the necessary information. The actual address label is added later during the SLAM process. Below is a brief video of the packing process.

The tote is conveyed back to be refilled at picking. The parcel goes on a conveyor belt to the SLAM process. Often, the packing process is supplied with new packing material from the other side. Hence it is usually two rows of packers with one supply path in between. The image below is the view from the supplier of cardboard. 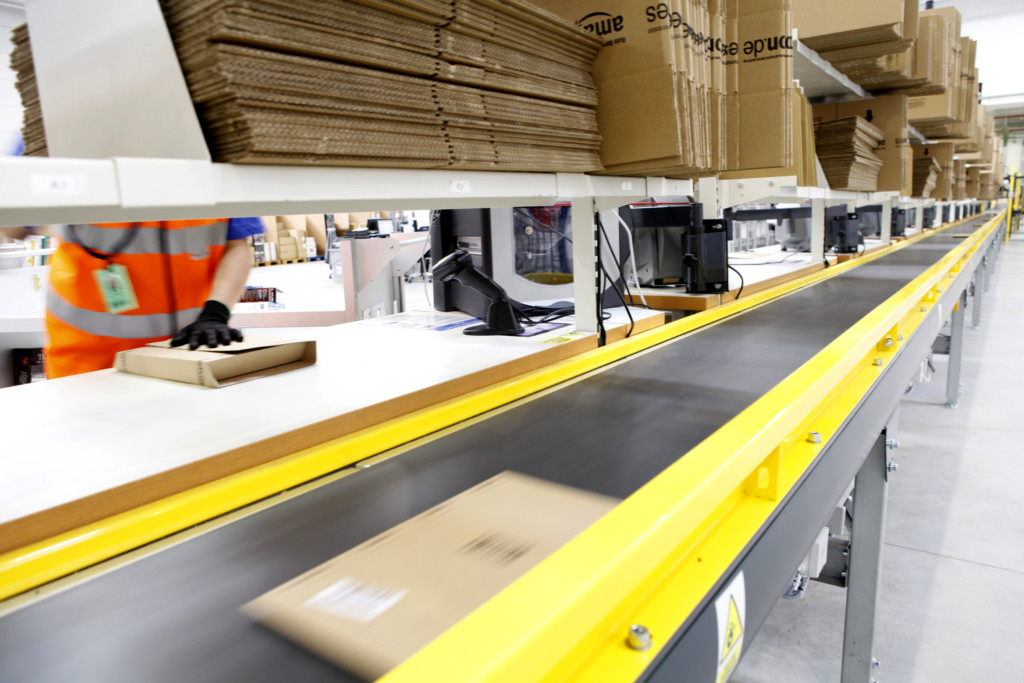 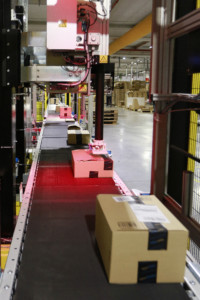 SLAM has nothing to do with wildly slamming your parcel around (that is done during delivery 😉 ), but stands for Scan, Label, Apply, Manifest. It is also a final quality check that weighs the parcel and compares the weight with the expected weight of the items and packaging. Again, if there is a discrepancy, the parcel is checked again manually.

During packing, a barcode was attached to the parcel. This links the parcel with the related information, but this is only machine-readable. During SLAM, a machine scans this code, prints a proper shipping label that humans can also read, and attaches this label to the parcel. The image on the right shows the SLAM machine, and the image below shows a parcel with the packing barcode in the upper part and the SLAM  label below. 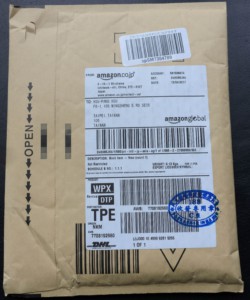 The machine looks like it is pressing on the parcel. However, it is moving only slightly above the parcel, and the adhesive label is attached using air pressure instead. A fulfillment center may have somewhere around 10 SLAM machines. 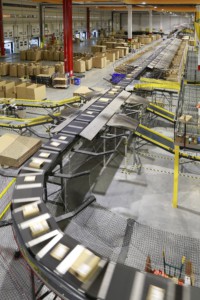 Now the parcel is ready for shipping. A conveyor belt with speeds of up to 30km/h brings the items to a sorter. There seem to be different sorting systems. The first picture here on the right from MAD4 seems to have a cross belt (a small conveyor belt going sideways on top of the big conveyor belt). There is one parcel per segment. When the parcel passes the correct slot the cross belt activates and moves the parcel to the right or to the left into the correct chute. I have seen similar belts also at the Haneda Chronogate logistic terminal. 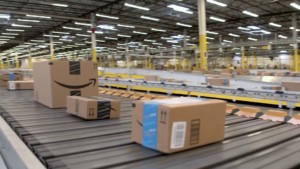 The two locations I visited had a slightly different belt as shown here on the left. Instead of a small cross belt, they used sliders to push the parcel off the belt into a chute. 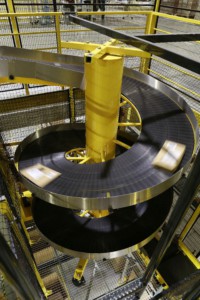 Finally, one photo I saw seems to have indicated a manual sorting, although I am not sure about the details of this photo.

Depending on the floor of the sorting, the parcels may also slide down a cork screw slide to the level with the outbound loading docks. Like pretty much all conveyor belts I have seen, items are dropped occasionally. Every now and then a parcel falls off. Hence, someone checks the belt occasionally and inserts dropped parcels back into the process.

The parcels are now sorted and ready to be loaded into the delivery trucks. The image below shows the outbound area, with the conveyor belts extending into the trucks. The cork screw slides on the right come from the sorting area. FRA3 was under reconstruction and temporarily loaded the trucks manually until the new conveyors were installed. 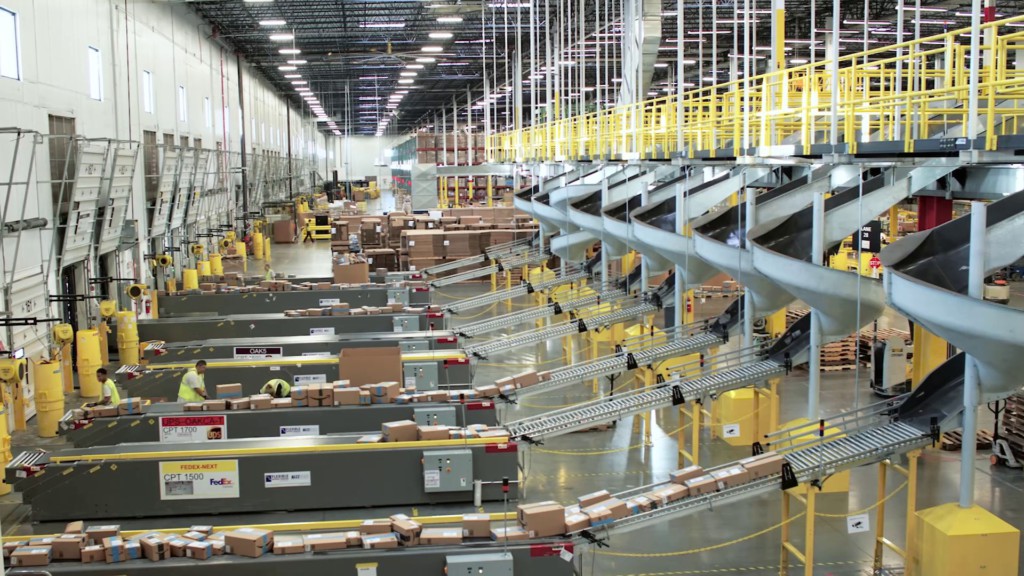 Depending on the type of truck, the loading can feel like a 3D version of Tetris, trying to fit as many packages into the truck as possible. FRA3 ships, on average, 900,000 to 1 million items per week, with a peak demand of 300,000 items in 24 hours during Christmas. 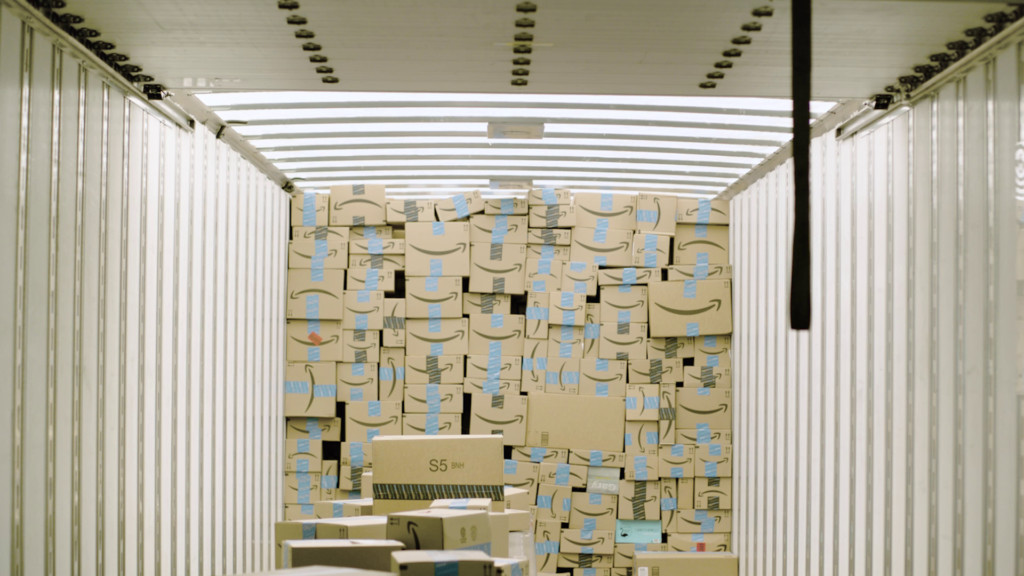 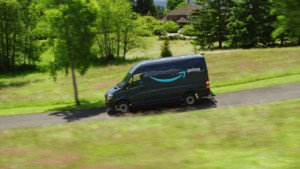 Parcels are shipped with all types of logistic companies like FedEx, DHL, Hermes, UPS, DPD, Royal Mail, US Postal Service, and whatever is available in that country. More and more, Amazon is also using their own delivery trucks for the last mile. This is of course a threat for the other delivery companies, who make good business with Amazon on the risk that this business can evaporate very quickly. A small fleet of aircraft also handle longer distance transport between centers. Lately during delivery I was able to see a live map with the location of the delivery van, and how many more stops there are before it arrives at my location. This made accepting parcels a lot easier for me.

A Note on Terminology

In SAT2 they had different colored boxes with different names for different stages in the process. For this they went quite a bit through synonyms for boxes. Let me give you the sequence again: The KIVA shelves are called “pods.”  These are picked into yellow “totes.” These totes go directly to pack, unless it is a multi-item package. In this case these totes are re-picked into gray “trays.” Single pack totes and multi-pack trays go to packing, where they finally go into a cardboard “box” (or smaller items into envelopes). Problems and damaged goods go into an “amnesty bin,” which are handled by problem solvers.  All these different names probably help with communication rather than just calling all of them a box. In FRA3, however, they used the same box for the entire path from pick to pack, plus large black boxes for shipments between fulfillment centers. All centers also had shelves on wheels. Larger items are also moved by forklifts.

This fourth post in this series on Amazon Fulfillment centers closes the outbound process. However, there is more. In my next post I will talk a bit about the software behind this process that makes all this possible. I also will show you some surrounding processes. Until then, stay tuned, and go out and organize your industry!