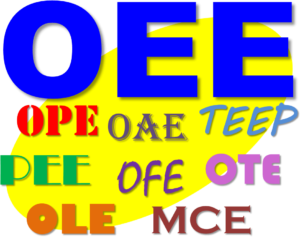 If imitation is the sincerest form of flattery, the OEE (Overall Equipment Effectiveness or Efficiency) is indeed one of the most appreciated measures in lean. I counted at least eight different variants and adaptions of the basic OEE – although let me tell you that I am not impressed with all of them. Many of them seem to be theoretical academic constructs with little meaning for your shop floor. Also, identical acronyms and similar terms are often used in a completely different way, adding quite a bit to the confusion. On top of that, I think the OEE is used way too much in industry where it does not make sense, and many OEE numbers are heavily fudged. Anyway, let me show you the many different flavors of the OEE.

OEE and Synonyms for the OEE

The OEE is is the relation of the number of parts produced on a machine versus its theoretical maximum capacity. Or, alternatively, the OEE is the relation of the minimum time required to produce a number of goods versus the actual required time. Both approaches will lead to the same number. For more on OEE, see my series of posts starting with What is OEE? – Definition of OEE.

Note: In German, the abbreviation GAE for Gesamtanlageneffektivität is also used as a synonym for OEE.

The OEE stands for Overall Equipment Efficiency (i.e., a focus on the “equipment”). However, you can also calculate an OEE for operators (i.e., people). The underlying calculations are the same, although it is a bit more difficult to get good data, not to mention the cooperation of the operators.

Yet another term that (as far as I know) is synonymous to OEE.

Utilization Variants for a Process

The OEE by itself is a sort of utilization. What you produced on a machine versus what could you have produced. A few OEE variants stick with this basic approach.

TEEP was introduced to fix a perceived problem of OEE. The availability losses are the losses due to process stops. However, sometimes you turn off your process intentionally (e.g., when your plant closes at night or on Sundays). The OEE gives you the option to include or exclude this time (more on this at How to Measure OEE). Naturally, excluding times makes your OEE look better – although your system is unchanged. Nowadays many plants also exclude planned maintenance and other planned stops – which I disagree with.

The TEEP is an attempt to fix this number fudging by simply requiring a 24-hour-7-day-a-week time basis. Any and all times are included for the OEE calculation, no matter what.

Personally, while I like the direction, I think this is overkill. First, you can already do this with the normal OEE. Secondly, if your plant is really closed, then in my view it is often not sensible to include these times. In any case, the TEEP is the OEE with an around-the-clock time basis.

PEE is  a most unfortunate abbreviation, I must say. Anyway, remember the three loss groups – availability, speed, and quality losses? Sometimes you see a formula where the OEE is calculated by multiplying the availability rate, performance efficiency, and quality rate. The formula is then:

The PEE then introduces the weights k1, k2, and k3 to the different factor.

The idea is that you can give more weight to the factor (availability, efficiency, quality) that you consider more important. I didn’t like the original formula to begin with, and adding arbitrary weights makes no sense at all to me. Luckily I have not yet seen this formula used in practice. Don’t let your factory be the first to start PEEing around!

Utilization Variants for an Entire System

The OEE is a tool to show the utilization of a process and (more importantly) to point out how to improve this process. Naturally, there is the desire to also have a sort-of OEE for an entire line or an entire factory. Let’s look at the metrics.

This is also sometimes Overall Throughput Effectiveness, which is a direct expansion of the OEE to the whole factory. The OEE can be calculated as follows:

The OTE simply expands this to the whole factory:

This makes sense. The thinking behind this OTE equation is sound. The problem is: What is your maximum number of good units for your factory? If it would be flow production (e.g., an assembly line), I would use the cycle time of the slowest process to calculate the maximum number of parts possible. Unfortunately, this does not work for job shops and complex factories. There are research papers out there with a lot of complex math to do this – but I don’t trust these calculations very much. Hence garbage in, garbage out for an otherwise sensible metric.

The goal is – again – to represent the utilization of a line. This OLE approach uses the OEE of the individual processes, and merges them together in a joint number. There are different ways to merge the individual OEEs into an OLE – but all of them seem to be mostly academic. One approach uses fuzzy logic while another uses neural networks and learning algorithms. In my view, both are unsuitable for the shop floor.

This originates from semiconductor fabrication, and hence is also sometimes called Overall (semiconductor) Fab Efficiency. The OFE claims to be a further development based on the OEE that looks at the entire factory. However, the underlying metrics are completely different. While the good old OEE looks at parts produced and times  required, the OFE looks almost exclusively at cost. Hence, it has little to do with the original utilization-related OEE but is more of a cockpit or dashboard with many different metrics related to the factory.

You then distribute weights to your different cockpit KPIs, multiply the KPI with a weight, and create a overall sum. It is somewhat similar to the PEE above, but with many, many more variables. Which ones you pick is up to you.

Again, I don’t see the benefit of this at all. If for some reason you want to mash everything together in a number, this is a possibility, but … why? The number is un-understandable and has next to no meaning.

The MCE is something different. Rather than looking at the number of parts produced, this looks at the lead time of a system. The MCE is the time an individual part was actually worked on (i.e., the value-added time) through the total time the part was in the system (i.e., the lead time).

This is a useful metric if you are more interested in the lead time than the takt time (production rate). A similar metric is already in use in value stream mapping, where the percentage of the time in value add is calculated. However, don’t expect large numbers of 70%-90% like for the OEE. The MCE is usually rather low, often around 0.05%, meaning a part is worked on only 1/2000th of the time it is in the system; 99.95% of the time the part is waiting around.

As you have seen, there are lots of different OEE variants and flavors. OPE and OAE are merely synonyms. TEEP is also almost the same, with the limitation of around-the-clock as a time basis. For an entire line, you could use OTE – if you manage to get the required data on the maximum capacity of the line. If your focus is lead time rather than production quantity, then MCE is a possibility. Stay away from OLE, OFE, and PEE. Now go out, figure out where your system has its losses, and organize your industry!

10 thoughts on “The Many Different Flavors of the OEE”