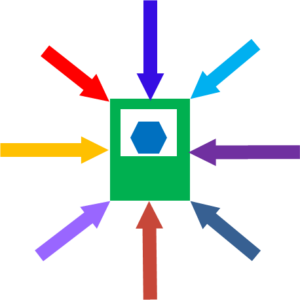 There are different ways to organize your shop floor. You surely know the flow shop and the job shop. There is also a project shop (with many variants of names). While the flow shop is in many cases the ultimate goal, each shop has advantages and disadvantages. Let’s look at them in more detail, starting with the project shop.

The project shop has all manufacturing in one location. All material and information has to come to this location, and the finished product is then completed at this location.

This approach is most often used for very large and difficult to move products in small quantities. For example, if you build a large ship, it may be easier to move all parts to the ship and assemble it on-site rather than move the ship around for the different production steps. Another example for immobile products are … well … immovables, better known as real estate. Most houses are constructed on-site.

This is actually the least-known production method. Even the naming is a bit confusing. I like to call it the project shop, in line with the job shop and flow shop. Some sources simply call it “project,” which is also technically correct, but to me a bit ambiguous. In German it is called “baustellenfertigung,” literally meaning “construction site production,” which describes it well. Closely related is workbench manufacturing, where the part stays on the workbench until it is completed. Some sources also call it a “fabrication shop“. If you have a better name, please let me know.

Before 1920, project shops were actually quite common for anything that could not be carried around by hand. Even Henry Ford initially had teams of about fifteen people, with each team building a complete car at one location before starting the next car. This was the way to build products that were not easily movable.

Additionally, there were few or no interchangeable parts. Filing down parts to fit before assembly was a regular occurrence at that time.

Of course, that all changed with the introduction of the assembly line. While Henry Ford did not invent it, he used it to its finest. Soon pretty, most all car makers switched from these craft-type productions to assembly lines. This brought enormous improvements to cost, productivity, and quality. You would imagine that this would be the end of project shops in automotive. Well … no!

Swedish car maker Volvo experimented with such project shops for automotive assembly again. Using such project shops, they opened a plant in Kalmar in 1984, and later in Uddevalla in 1990. Teams of around ten workers assembled a complete car in one location. Their goal was to make work better for the workers. Unfortunately, productivity went down, quality went down, material supply was a mess, and the workers were stressed about the same things as in an assembly line. Uddevalla was closed after three years, and Kalmar was changed to an assembly line after three years. The experiment did not work.

This didn’t stop Audi from trying again. They are currently in the news for setting up a “Smart Factory,” a project shop and job shop crossover in Neckarsulm, Germany, and also in Györ, Hungary. Around two hundred assembly stations will work together to create new cars. While a station is not responsible for an entire car, they do larger parts of the work. The vehicles are moved around on autonomous vehicles, which will use the finest of Industry 4.0 technique to sort out where to go next … or maybe not.

On a side note: Their images and videos show drones flying around with steering wheels. From what I know, this is (like many Industry 4.0 things) merely an attempt to impress people with a staged demonstration, but definitely not a part of normal production.

Overall I am skeptical if this Audi smart factory will be successful or not. Chances are, five years from now we will not hear about it anymore.

The Problems with Project Shops 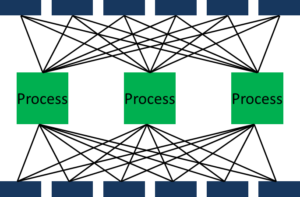 Let’s start with the material and information flow. You have to bring the material to the workplace. If you have multiple workplaces, all material has to go to all workplaces. This will be a mess.

Ideally, you would provide a complete set of parts at the workplace before the worker starts working on a new product. Unfortunately, you would need quite a lot of space around the workplace to store all the parts. In all likelihood, you don’t have that space. Hence, your material delivery needs to be timed to arrive before it is needed. Using lean philosophy, it should arrive exactly when it is needed, but I think we can just forget about this here.

In a flow shop (e.g. an assembly line), each material goes only to one process (or very few processes) in the line. Since there are few part types at the process, you can have more of each of them, as they are needed anyway. This makes it much easier for the material logistics. Each part has only one destination, and due to a small buffer it is usually not time critical.

In contrast, for a project shop, the material needs to go to a different station each time, and if the supply is late, it is likely that work is interrupted. Even worse, it may be possible that the wrong part gets installed. Hence, it is much more demanding and complex for the material logistics, which is another way of saying that things will go wrong frequently. Such project shops are known for frequent missing materials, resulting in delays, rush orders, and overall inefficiencies.

In an assembly line, it is easy to keep production sequence. You simply order the processes in the sequence you want them. In a project shop, however, the workers have to make sure that the sequence is right. If multiple workers work on the same car, it is easy to attach parts out of sequence. If you install the door cover of a car, it will be no longer possible to install the wiring behind the door panel. You would have to remove the door panel again, install the wires, and attach the panel again. Such errors can happen way more than you want them to, resulting in lost time and potentially damaged products if you catch the problem, or a defective product if you don’t.

Efficiency and quality will also suffer. Usually, a good workload for a factory worker is 30 to 120 seconds of work before the work is repeated. Such a small work content is easy to learn, and – even more importantly – quick to master. Workers will become experts soon, which makes them work more efficiently and produce better quality. Job rotation reduces boredom.

In contrast, a project shop may have hours or even days of work before the steps are repeated. It takes much longer to learn, even longer to master, and overall it will be less efficient with worse quality.

Since there are more materials and tools around, the worker also has to walk more to get the next part or tool. Walking time will increase, and hence waste will go up. Overall, the project shop will have a quite high variable cost compared to other options.

Finally, the mass of materials and tools and the long work sequences make it difficult to observe the process to find improvement ideas. You need to observe a process multiple times to see deviations from the standard, which is difficult if the work content may take hours before it repeats. Overall, optimization and improvement (kaizen) is very difficult to do.

The problem is similar when creating standards. Such a long work content would result in a very long standard, which is difficult both to create and to follow. In all likelihood, the standard will be only very basic, which again leads to inefficiencies and quality mistakes.

This is not to say that the project shop does not have advantages. It is more flexible to change to different products. It probably requires less initial investment. If the product is difficult or impossible to move, it may be the only option (although even big jumbo jets are nowadays produced on an assembly line).

Overall, the project shop has limited use for modern production. There are cases where it is still useful, but most production is done using job shops or, even better, flow shops. I will talk about job shops next. In the meantime, go out and organize your industry!