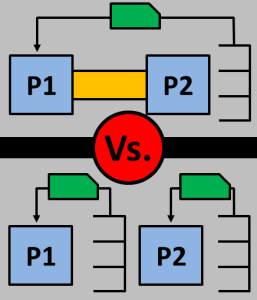 In almost all cases, pull systems are superior to push systems (read, for example, my posts on The (True) Difference Between Push and Pull and Why Pull Is So Great!). Good flow shop pull systems are implemented using either kanban or CONWIP loops. And here you have multiple options. You can make one big loop with FiFo lanes between the processes, or you can split it into multiple smaller loops by adding supermarkets between selected processes. I have already looked at the question on when to use supermarkets and FiFo based on ease of use. More details are available in my posts Ten Rules When to Use a FiFo, When a Supermarket – Introduction and The Rules, as well as Top Five Cases When NOT to Use a FiFo.

However, so far I have not yet looked into the aspects of inventory or work in progress (WIP) and the influence on the delivery performance. As you surely know, reducing inventory is a constant drive in industry in order to reduce the associated costs. Similarly, delivery performance is also high on the agenda of most managers. Unfortunately, they are usually somewhat inverse related. More inventory often gives you a better delivery performance, and vice versa. Hence, I gave a master’s student the task to look into it, and this student did an excellent job of looking into these details (source below).

The graph below shows you the best trade off between WIP and delivery performance you can get for both a single loop and FIFO system and a double loop system where the two processes had equal cycle time and the customer was 10% slower. However, no matter which system we simulated, the results were all very similar. In all cases the single-loop system was better than the double-loop system. 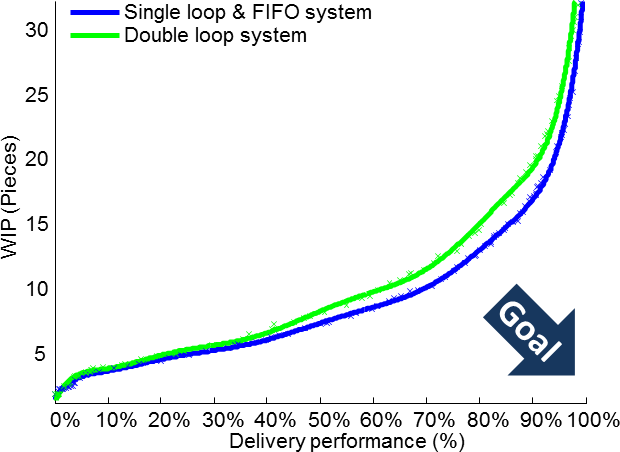 These two lines are close together. We also went through the difficult math using confidence intervals and statistical hypothesis testing to verify that this difference is not just a random fluke. The difference is statistically significant for delivery performances above 50% – which is where most factories are. More similar results can be found in the sources given below. 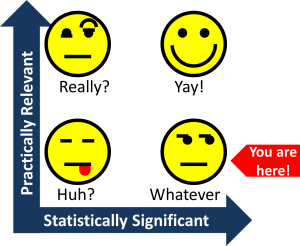 Hence, using a single larger loop requires statistically significant less inventory for the same delivery performance than two smaller loops. However, statistically significant does not necessarily mean practically relevant! In fact, I do recommend you to take other factors into consideration before making a single large loop across your entire factory to optimize your WIP!

First of all, the benefit is not that big. For example, to achieve a 95% delivery performance (a common number in industry), you would need about 20% more WIP with a two-loop system compared to a single loop with a FiFo in between. There are much better ways to reduce inventory (e.g., by reducing the lot size).

Second, the above graph represents the perfect set-up of number of kanban and FiFo capacity. However, unless you test all combinations of number of kanban, you are unlikely to get to this perfect setting. In fact, most ways to determine the number of kanban are extremely crude. The kanban formula is an extremely rough estimate, and with equally valid but different assumptions you quickly get a difference of 30% or more (see also my series How Many Kanbans? – The Kanban Formula). The other alternative to the kanban formula is an expert estimate, which is nothing but a rough guess by someone who knows the system (see How Many Kanbans? – Estimation Approach and Maintenance). Overall, your chances of actually hitting that sweet spot are rather slim.

Third, if you know lean, then you know the idea of reducing unevenness (Mura). The single-loop system, however, may end up with a big pile of material at the end, and little in between, a very uneven result. This is usually not desirable in lean. There is even an A–B Control method in lean that stops other machines to prevent exactly this unevenness.

Finally, due to the small improvement in WIP, I think other considerations are much more important than merely a slight WIP reduction. In one of my previous posts I listed ten reasons when to use a supermarket instead of a FiFo lane (Ten Rules When to Use a FiFo, When a Supermarket – Introduction and The Rules). The default fallback is always a FiFo lane anyway, not because of less WIP but rather because it is usually so much easier to manage than a supermarket.

I hope this article on the detailed relation between inventory and delivery performance with respect to the manufacturing system design was interesting to you. Granted, it is not a great revelation about a new lever to play around with. However, I do find it necessary to also know which levers are NOT important. Now go out, play with the levers that work, and organize your industry!

6 thoughts on “Supermarket vs. FiFo – What Requires Less Inventory?”