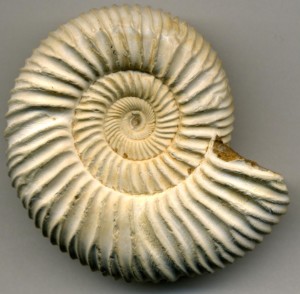 When setting up a new production – or even when rearranging an existing production – one important decision is how to arrange your processes. I have written a lot on line layout, but this post will look at how the arrangement of lines evolved at Toyota. Some of their insights are now accepted wisdoms in lean, but many companies still struggle with it. This post also looks into the manning of machines, especially multi-machine handling. The blog post is based on the appendix in the Toyota Handbook from 1973.

One Person per Process

Toyota started out like many other companies, as a job shop. They had different processes, and one person was assigned one process. This is common, as it is the most intuitive way to set things up. The worker puts a part in the machine, starts the machine, and waits for the machine to complete its task before removing the part and adding the next part. The benefit of this approach is that it is easy to set up. It is also perceived to be easy to control, but as we will see later with the arrangement in sequence, there are better options.

When Toyota started out, they had their parts in boxes on the floor, which resulted in quite a bit of walking and searching. Ergonomics was not really considered, and the workplace was set up simply however the machine was designed. The workspaces were at different and often uncomfortable heights. A separate quality inspector was in charge of quality, before the material was moved to the warehouse and later to the assembly line. The attitude at that time was that a station with few completed goods was slacking off, and workers always tried to have a pile of completed products to show how much work they did. It was believed that “the more you have, the better.”

If you are at least somewhat familiar with lean, the above paragraph should have set off multiple alarm bells in your head. Yes, even Toyota started out not lean (at least partially because they invented lean as they went along improving their production system). This example here is for the machining division, but they found similar situations in many locations in different plants.

The intuitive next step is to have one person handle multiple machines. While one machine is processing, the other machine is loaded or unloaded. This reduces the waiting time and hence the waste. The first picture here shows workers handling two machines. The two machines could be cattycorner or opposite to each other. The “corner” solution may have less walking or moving of the operator. The “opposite” solution may have easier access for inbound and outbound material. Either way works, and your situation will determine which one is better.

You can also try to have a worker handle three machines, as shown here. Depending on the arrangement of the machines, the material flow of inbound and outbound parts may be a bit more challenging, especially for larger parts.

You could also imagine workers handling four, five, and six different machines. This also raises the question of the material flow. As for the number of machines, theoretically, a worker can handle a large number of processes, with the drawback that these processes may have to wait a long time for the worker come back.

Number of Processes for One Person 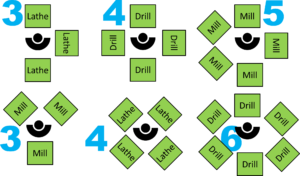 In my next post I will continue the story of how Toyota evolved over time, starting with some highly suggested features for multi-machine handling. Your company probably also did not hit perfection on the first try, but needed multiple iterations and continuous improvement. And, since no company is ever perfect, this need for continuous improvement never stops, not even at Toyota. Now, go out, evolve your company, and organize your industry!