You may have heard of Takumi at Toyota. Takumi in general are highly skilled artisans that excel in their craft. Despite Toyota mass-producing cars using lots of machines, they also employ hundreds of Takumi. This blog post takes a deeper look at what a Takumi is, and why they are so important for Toyota and other Japanese companies.

What Is a Takumi?

A Takumi is, in Japanese, a craftsman. artisan, workman, or carpenter​ (匠). At Toyota, they are highly skilled artisan-experts focused on one area. This may be leather-working for seats, plastics for injection molding, sheet metal working, spray painting, welding, test driving, and many more. They also have Takumi that specialize in quality control of sheet metal, able to feel even the slightest dents with their hands. At some Toyota plants you can give this dent detection a try, and it is really tough, even when they point out the dent to you. Most importantly, these Takumi still frequently work the material with their own hands instead of machines. They use all their senses—sight, hearing, touch, smell, taste, and more—to create a masterpiece.

How to Become a Takumi

Becoming a Takumi takes skill and time. A LOT of time. A person who puts his life’s work into one specific field can eventually become a Takumi.

In the West, it is often (and somewhat arbitrarily) said that you need 10 000 hours of practice to become an expert. For example, you would need to practice the piano for 10 000 hours to become really good at it. Hence, I proudly announce that I am a master of eating, sleeping, and sitting on a chair. Sadly, based on a back-of-the-envelope calculation, I have not yet mastered the use of toilets. But you are probably happy to hear that I will be fully potty trained within the next twenty years or so.

In Japan, the demands on a Takumi are more rigorous. It is (also somewhat arbitrarily) said that you need 60 000 hours to become a Takumi. This is roughly the working time of a thirty-year career. But the time alone is not enough. Surely you know a colleague who has worked for thirty years in the field but still does not know what they are doing. But with skill and intelligence, thirty years of experience is enormous! A colleague with thirty years of experience is a respected authority, and his word carries a lot of weight. A Takumi is basically the highest level of skill in its respective field.

Also note that the time is for a task that requires skill, talent, and practice. A career at checkout at the supermarket would probably not be considered a Takumi, since it requires much less skill than, for example, making wooden joints or cooking a sophisticated meal. Takumi are masters in their craft, and it would be odd to call an experienced supermarket checker a master in their craft. 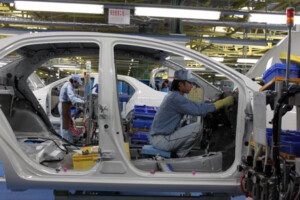 The question is, why does Toyota use Takumi? After all, Toyota is a company that mass-produces cars using machines. Very little of the car is made by hand. One of the few exceptions may be the sewing of leather seats for Lexus, the luxury-brand of Toyota. Most parts are made by machines, and the skill of the worker has little influence on an automated and highly standardized process. Where at Toyota does the Takumi master artisan fit in?

The skills of a Takumi would be wasted if they merely produce cars or car parts. And they (usually) don’t. Instead, they try to infuse their skills on the system. They train workers. They help with designing parts and setting up machines. They are the ultimate authority on any questions related to their expertise, and are regularly consulted on this.

Toyota believes (and I agree) that you need humans to improve. A machine by itself will never become better. You need human ingenuity and creativity to improve. If you want to improve to become world class, you need world-class experts to help you with that. And that is where the Takumi come in at Toyota. Their expertise gives Toyota the edge to make parts, machines, and works standards even better than they are now. They push the envelope of the possible. They travel all around the world to train, help, and mentor others, as well as fix problems, develop new techniques, or generally improve Toyota.

For example, in painting, a Takumi helped in programming the painting robots. Toyota says the Takumi “trained” the robot. As a result, the robots now move very smoothly without jerking around, producing better quality while at the same time using less paint. Due to the improved quality, Toyota was able to reduce the number of human workers on the line from sixteen to six. Similar improvements in car door seals saved Toyota 39 cents per car—which does not sound like much, but in automotive with millions of cars that is huge! (Source)

Toyota employs around 500 Takumi in all kinds of specialties. Roughly one of every thousand employees at Toyota is a Takumi. Due to the level of expertise, most Takumi are near retirement age. The next generation of Takumi is selected from the most skilled younger workers. They then get a three-year course, including at least one year in a Toyota Global Production Center in addition to stays at multiple plants.

Despite all the machines, these Takumi often still work by hand, as only the actual working by hand gives you the experience and feeling for the product and the process. For similar reasons, apprentices in metal working spend considerable time filing metal in different exercises. While the file is, from an industrial point of view, outdated, the feeling for the metal is invaluable for later metalworking with machines. Hands-on experience truly can’t be replaced.

Are Takumi Only at Toyota?

Takumis are found all over Japan, in all kinds of fields. This may range from the seventy-year-old sushi chef to the eighty-year-old carpenter. They have in common that they spend a long career in one profession, and are among the best in their field. Takumi is simply the Japanese word for a master artisan.

Nissan also has Takumi. They have only a few of these experts. But different from Toyota they do not “train” the robots, but instead build high end V6 engines for the GT-R.Each engine gets a label with the name of the Takumi that built it. Nissan believes that this gives better quality for their flagship engine.

They may even have different names. For example, at Nippon Steel, a steel foundry, the Takumi are called Steel Meister, where the Japanese mix the English word Steel with the German word Meister for master craftsman. These are truly experienced old hands that are in charge of mixing the steel, a skill that requires a lot of intangible knowledge.

Japan’s oldest company, Kongo Gumi, is a fortieth-generation carpenter’s workshop that builds temples. Their master carpenters are called Miya Daiku (宮大工, for shrine carpenter). Interestingly, they specialize in a single tool. They have a miyadaiku for saws, another one for chisels, and another one for planers, for example.

Even the Japanese government officially recognizes such masters in performing arts and Japanese crafts and calls them Living National Treasures (人間国宝, ningengokuho, for human and national treasure). These Living National Treasures are truly exceptional, as (due to budget limitations), there are at most 116 of them in Japan. South Korea has a similar system (인간 문화재; ingan munhwajae)

Even other countries have this. German craft still often uses the apprentice-journeyman-master (Lehrling, Geselle, Meister) system, and a certified Meister is expected to know his craft well. However, the average age of a freshly branded Meister is only twenty-five, hence some of them are still a bit green behind the ears. It is seen as comparable to a bachelor degree. However, an older and more experienced Meister can easily be compared to a Takumi.

There is a well-known one-hour video “Takumi – a 60,000-hour story on the survival of human craft,” available on YouTube. However, it is rather thin on actual content. Instead, it has plenty of flowery words with little actual meaning. Nevertheless, the pictures are stunning. Watch only if you are bored.

So, overall, Takumi can help a company to improve their processes. But real Takumi are rare. I have been doing lean for twenty-five years now, and some people started to call me a lean sensei, but I am probably not (yet?) a Takumi. At Toyota, there are experts in lean that know oh-so-much-more than me…except that they don’t write a blog. Anyway, now go out, get the help of a Takumi, or if unavailable at least sometimes work the material by hand to learn its behavior, and organize your industry.