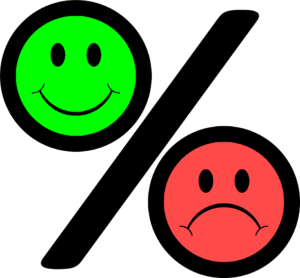 It is common in industry to measure the utilization or the closely related OEE. It is a bit more difficult, however, to set targets for these KPI. Often you hear people wanting or demanding an OEE as high as possible, with a long-term target of ideally 100%. That is often problematic. The utilization or OEE is unfortunately not a clear cut target that you can simply maximize. Let me explain…

OEE is short for Overall Equipment Effectiveness (or sometimes Overall Equipment Efficiency), and is a measure closely related to utilization. It tells you how much you produced compared to how much you could have produced at most, theoretically, in the same time. In other words, if you have an OEE of 80%, you produced 80% of what your system could have produced if everything went perfectly. The OEE can be calculated in two ways, giving identical results:

In both cases you compare the actual time or output with the time or output that would have been possible under ideal conditions (i.e., nothing goes wrong, no breakdowns, defects, etc.). The OEE should be a number between 0 and 100% – although with number fudging you sometimes see values over 100%.

I have written a lot about OEE before, including what it is, what OEE is good for, how to measure it, and also some alternative ways to calculate it and many measures similar to OEE. 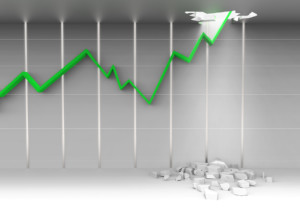 First, let’s get one thing out of the way: an OEE above 100% is bogus. An OEE is a percentage of what is possible under ideal, perfect circumstances (i.e., the maximum speed). If your OEE exceeds that, then you are either working faster than physically possible, or you are fudging the numbers. Pardon me, but I don’t believe that you can break the laws of physics, hence I won’t believe any OEE above 100% – although I have seen quite a few claims to OEEs above 100%.

The Kingman equation is a simplified system, but you will find similar behavior in all production systems. For example, if you make products on order (make-to-order), then your utilization usually goes up with the number of orders you have. However, the more orders you have, the longer each order has to wait. For a 100% utilization, you would need an infinite number of customers waiting. 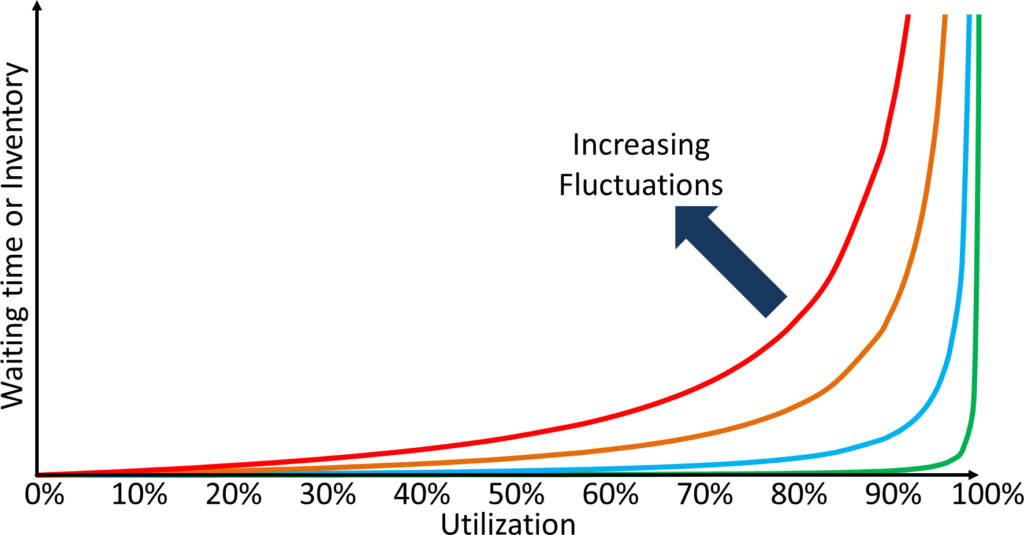 In any case, regardless of the level of fluctuations, they all approach infinity as the utilization approaches 100%. Hence, again, 100% utilization is not possible.

Before we will look at what a good OEE is, we should make one important distinction. Are you producing on order (make-to-order) or is the product on stock (make-to-stock)? With make-to-order, the lead time is usually critical for the customer, and the number of open or worked-on jobs should not get out of hand. Make-to-stock, however, can not only have larger inventories, but actually needs larger inventories to have items for the customers when they need them. Hence, very generally, you can have higher OEEs for make-to-stock production than for make-to-order production.

When in the industry, I am often presented with OEEs of 70–90% in mass production of make-to-stock items. However, whenever I dig deeper, I find lots of funny things unusual ways to calculate the OEE, like taking out maintenance time and other things that make the OEE look better but less stringent. For details, see my sarcastic article on fudging the OEE. If I would have done a more stringent calculation, I would get OEEs of 60–70% for not-outstanding-but-also-not-bad companies. The lowest OEE I have actually measured in mass production was around 30%, meaning 70% of the machine capacity was wasted. That was a not-so-good company.

Before I finally go to the different ranges of OEE, one more comment: The OEE is usually only relevant for processes that are bottlenecks or, more generally, limit your output. If you want more parts, you should improve the bottlenecks (and this may be more than one machine at different times). For more on bottlenecks and their detection, see my series on bottleneck detection.

If a process is NOT the bottleneck, then its utilization does not matter, and usually the OEE does not either. (Small caveat: if it is highly inefficient, you may still improve it to reduce the time of the workers, but this is not a measure to get more parts out of your system). But overall, focus with your OEE on your bottlenecks.

One anecdote: I know the story of one smaller company that bought an expensive primary machine. Since it was expensive, the thought was that the machine should run as much as possible. Yet, the customer did not buy enough product, and the machine was just filling up warehouses with products that got old and tied up cash. If your customer is not buying enough, then the OEE should not be used to justify more production, but could be used to produce more efficiently. 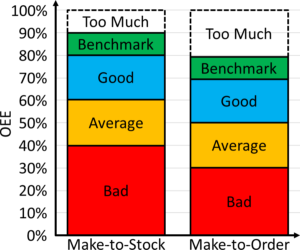 So, let’s have a look at what I consider a good range of OEEs. This is only my personal opinion, and (unfortunately) not based on a lot of data, the problem being heavy number fudging of OEEs all over industry. Also note that these are for OEEs that are calculated stringently, and not the generous “I need goo numbers” type of OEEs that are unfortunately all too common.  I believe for make-to-stock production, having an OEE of 80–90% is outstanding. If the OEE is above 90%, then you are getting too much toward the danger zone of infinite inventory. For make-to-order production, I would go a notch lower and consider 70–80% OEE (stringently calculated) an excellent value. This (and ballparks for good, average, and bad OEEs) is shown in the table and graph here. Again, this is only my opinion.

So, this concludes the post on what I consider a good OEE. I hope this was useful, and I hope that your (stringently calculated) OEEs are not too far away from where you want them to be (again, not 100%!). Now go out, get your OEE to a good range, and organize your industry!

5 thoughts on “What Should Be Your Target OEE?”